The New York Times is collaborating with Google Cardboard on a new project called "NYT VR" that includes an app, virtual reality films and the distribution of more than one million Google Cardboard viewers. 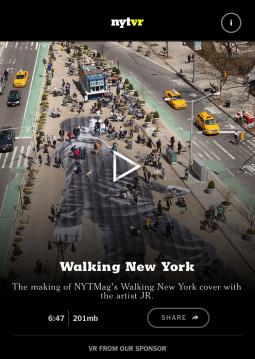 The NYT VR app, courtesy of the New York Times.

Among the first projects is a VR film, produced with VRSE.works, called "The Displaced" that focuses on children in the global refugee crisis. Additionally, films from GE and Mini will premiere on the app. GE's film was created by the The New York Times' in-house agency, T Brand Studio, in conjunction with Framestore (which was an Ad Age Production Company Standout this year) and will tell "a story of how design in industry and technology takes cues from nature," the company said in a release. Andy Goldberg, GE's chief creative officer, said the company had been talking with The New York Times about doing a unique project for a while.

"I think the amazing part of this is, we could've taken an ad and just thrown it into VR," Mr. Goldberg said. "We really spent time wondering what is an editorial piece that will complement what viewers will see when they put the headset on, an experience they gain from. We want to be part of that natural experience they get out of The New York Times, and I feel like we've achieved that."

Andy Wright, senior VP-advertising at The New York Times and publisher of The New York Times Magazine, said the publication usually brings the world to its readers, but that's not the case with the mass distribution of Google Cardboard viewers, which is 'normalizing VR'. "In fact, we're bringing our audience to the world," he said, adding the VR move has the potential to be a watershed moment for media.

Now that the publication has an infrastructure for producing virtual reality films and an app to make them available, the company is looking for continuity and opportunities for brand partners to build films, Mr. Wright said. "There's a tremendous amount of interest [in partnering],"said Meredith Levien, exec VP-chief revenue officer, The New York Times Company. "We think there's a lot to be gained in the advertiser community as well. ... For journalism and on the brand side, we'll keep pushing on the best ways to innovate storytelling itself."

Print subscribers will receive Google Cardboard viewers Nov. 7 and 8. "Times Insider" subscribers (an add-on package that gives access to podcasts, events and other content) and some digital subscribers will get emailed promo codes for free viewers. The app was developed with IM360, a virtual reality studio, and is compatible with iOS 8+ and Android 4.3+. It will be free starting Nov. 5, and can be downloaded from Google Play and the App Store.

"I want people to be amazed," Mr. Goldberg said. "At the end of the day, great storytelling is the only thing that's going to stand out. Virtual reality is a completely different way to storytell. I'd love people to be amazed -- not just with story, but the technology that engages all senses."