Content Marketing Is Red Hot, but It's a Term That Is Increasingly 'Overused and Underdefined'
READ THIS NEXT
Booming freelance economy fuels ad battle among job search brands
Credit: One Hundred Dollar Bill by Getty Images/Tetra Images. Comp by Ad Age.
If you're looking for someone to credit, or blame, for the term 'content marketing,' Joe Pulizzi, founder of Content Marketing Institute, may be your man.

Benjamin Franklin was one of the original content marketers. Back in 1732, when he published "Poor Richard's Almanack," his purpose was to get people interested in publishing.

Some 283 years later, content sometimes seems to have taken over marketing, to the point that it's surprisingly hard to define or distinguish from many other activities. It arguably encompasses not just branded entertainment and native advertising but in various ways social media, search ads, events, product placement, digital video and much more. In fact, you could make the case that all advertising is content, and vice versa.

Procter & Gamble Global Brand Officer Marc Pritchard, speaking at Cannes in June, described the term "content marketing" as "overused and under-defined," saying he'd prefer to just call it all advertising, based on the Latin root "advert," which is to "turn people toward" your product.

"That's what we do," Mr. Pritchard said. "It's just now the beauty is you have so many ways to express that."

Content marketing comprises $26.5 billion in global spending if you're just counting outside vendors' work for brands, according to PQ Media. It's as much as $144 billion if you measure marketers' own vast, internally generated content activities, like those of Red Bull and its Red Bull Media House. And continued double-digit percentage growth worldwide will push content marketing to $313 billion, all in, by the end of the decade, PQ Media said.

The overall U.S. market for content marketing was more than $67 billion in 2014, according to PQ Media. By way of comparison, the U.S. TV ad market is around $70 billion.

In part, the same things that make content hard to measure or define are fueling the growth because so many constituencies are pushing content marketing.

"One of the biggest drivers of content marketing is the challenge of getting awareness through other traditional channels," said Forrester analyst Ryan Skinner. "Pay-per-click costs have gone up and up. Organic and paid search teams are clamoring for content to improve search visibility. Social teams have been shouting for content. That, combined with people on both PR and media teams wanting to supplement their more traditional roles with valuable content, that draws traffic, interest and attention."

Because everyone has or wants a piece of it, the term becomes so all-encompassing that Mr. Skinner and Forrester won't even venture a stab at quantifying the market.

But for what it's worth, Forrester defines content marketing as "producing, curating and sharing content that is based upon customers' needs and delivers visible value." Realistically, Mr. Skinner said, "It becomes something the marketer has to define for themselves."

If you're looking for someone to credit, or blame, for the term "content marketing," Joe Pulizzi may be your man. As VP of Penton Media's Custom Media Group in the early 2000s, "I started playing around with the term 'content marketing,'" he said. Calling what he did custom publishing, custom media, branded content or custom content never seemed to resonate with chief marketing officers. "I would talk about content marketing, and immediately CMOs would sit up in their chairs."

Here's Mr. Pulizzi's definition of content marketing: "an approach where instead of distracting our audience with advertising that's not relevant to them, we're going to create valuable, compelling and relevant content on a consistent basis and build an audience over that time in order to see some profitable customer action."

And that profitable action doesn't have to be sales. It could be increased loyalty, advocacy or something else, depending on the strategy. Consider Dynamic Signal, which sells a platform that streamlines "employee advocacy" by making it easier to share employer-generated content quickly across social networks and measure the reach and effectiveness. It counts such companies as Mindshare, Deloitte, SAP and Humana as users.

Humana started using Dynamic Signal's system to channel content through staff on a voluntary basis in August and has seen employee advocacy grow to 8% of its brand mentions in social media, according to Jason Spencer, senior manager on the enterprise social media team. A lot of the content focuses on health and well-being tips, offering a clear potential benefit to a company that pays medical bills, brand impact aside.

"I get people in the content marketing industry who hate the term," Mr. Pulizzi said. "I say, 'Look, business is good isn't it? So why are you complaining? If there's a better term that comes along, we would be the first ones to look at it.'"

And business is good, he said, including signs of growth in print, such as the recent launch of Airbnb and Uber magazines, and the marketers pouncing on the rebound of podcasts. Trends could, of course, reverse themselves. Mr. Pulizzi points to the Gartner Hype Cycle for Digital Marketing, which places content marketing "past the peak of inflated expectations" and on its way toward the "trough of disillusionment," though Gartner predicts continued growth and gives it another two to five years before it plateaus.

Perhaps more ominously, nine out of 10 businesses are doing content marketing in some way, but their success rate is only about 30%, according to the Content Marketing Institute's annual research. Mr. Pulizzi called that result "tragic."

One reason is lack of strategy. Another is brands largely using content the same way they use advertising, to convey, at best, thinly veiled product pitches.

For all that, a recent Forrester Wave survey shows a post-hype bounce on the way. Only 10% of respondents planned to cut their content budgets this year, down from the 23% who planned to do so in 2013. Of the 90% planning to increase content-marketing budgets, more than half plan to do so by 20% or more (see p. 24).

Shareablee, which tracks content posted by the top 100,000 North American brands on Facebook, Twitter and Instagram, found more than 10 million such posts in the third quarter alone, up 17% from a year ago. And people aren't sick of them yet: They interacted with those posts through likes, shares, favorites or comments nearly 21 billion times, up 30% from a year ago.

Interestingly enough, all this may actually help more traditional paid advertising: Even where brands aren't getting organic reach for their content, they're increasingly willing to buy it. Take beauty videos, a popular genre where the vast majority of 45 billion views generated to date on YouTube went to beauty bloggers or other individual reviewers, according to Pixability.

But brand-produced beauty video views grew 85% from January 2014 to April 2015, the analytics firm also found, well ahead of the category's 50% growth overall. And 10 of the top 25 beauty videos by views were brand-produced in the first four months of 2015 -- driven mainly by paid views.

So while brands are getting more visibility for content, their dream of free distribution is fading, making it more natural to conflate "content" with "advertising," as Mr. Pritchard does.

That may only be stoked further by Nielsen's Total Audience Measurement, due out by year-end, which will assign gross rating points, the age- and gender-denominated currency long used to trade TV, to all manner of content, including video, audio, photos and text, whether they're traditional commercials, free social placements or media owned by the marketer. Marketers are likely to keep feeding the marketing-mix analytics grinder with gross ratings points, even if they measure work that's a far cry from the old 30-second spot.

But paying for attention still has limitations. Laston Charriez, senior VP-Americas marketing at Western Union, said content marketing should aspire to create a "two-way communication with consumers," crucial in an age of ad blockers and Netflix subscriptions. "My son is 24," Mr. Charriez said. "He doesn't watch TV. I can't reach him if I don't create content he wants to connect with."

For Western Union, that's meant everything from a three-minute paid skit on ABC's "Jimmy Kimmel Live" to launching an Avengers comic book in partnership with Marvel at Comic-Con and using recipes in a social media campaign to remind immigrants in the U.S. to send money back home.

Content marketing, while growing in importance, isn't a line item in Western Union's marketing budget. But maybe it's the whole thing. "It's embedded into everything we do," Mr. Charriez said. "So you could say it's everything."

What could draw 3,500 people from 53 countries in September to Cleveland, where they paid four figures plus airfare or ground transportation and surge hotel pricing? It's definitely not the Browns, but it does wear orange.

"One, it's our headquarters city," said Mr. Pulizzi, a former Penton Media executive who founded CMI in 2007. "And it's a heck of a lot cheaper to run an event in Cleveland" than Las Vegas or New York.

Cleveland doesn't scream "junket" the way that locales in Florida, California or Arizona might. But Cleveland works because the city gets behind CMW much like Austin, Texas, gets behind SXSW. Event banners fly downtown. Cabbies wear pins. And the airport has a "Welcome to the Content Marketing Capital of the World" banner.

Many attendees are former journalists in a world where waves of layoffs keep hitting traditional media as content-marketing firms swell.

Bob Gilbreath, president of Cincinnati-based Ahalogy, which specializes in content marketing on Pinterest, was a first-time speaker and attendee this year. "I've been to so many conferences," he said, "and this is a very unique and superior experience," which included a detailed rating and feedback on his presentation unlike anything he's previously seen from other conferences.

But David Germano, VP-content marketing at Empower MediaMarketing, who's been to CMW each of the past four years, said he did not see as many senior marketers this year or hear much new information, and he believes the surge in attendance came largely from first-timers. "This is a good show," he said. "But if anything, this year I was flat-out bored."­ –JACK NEFF 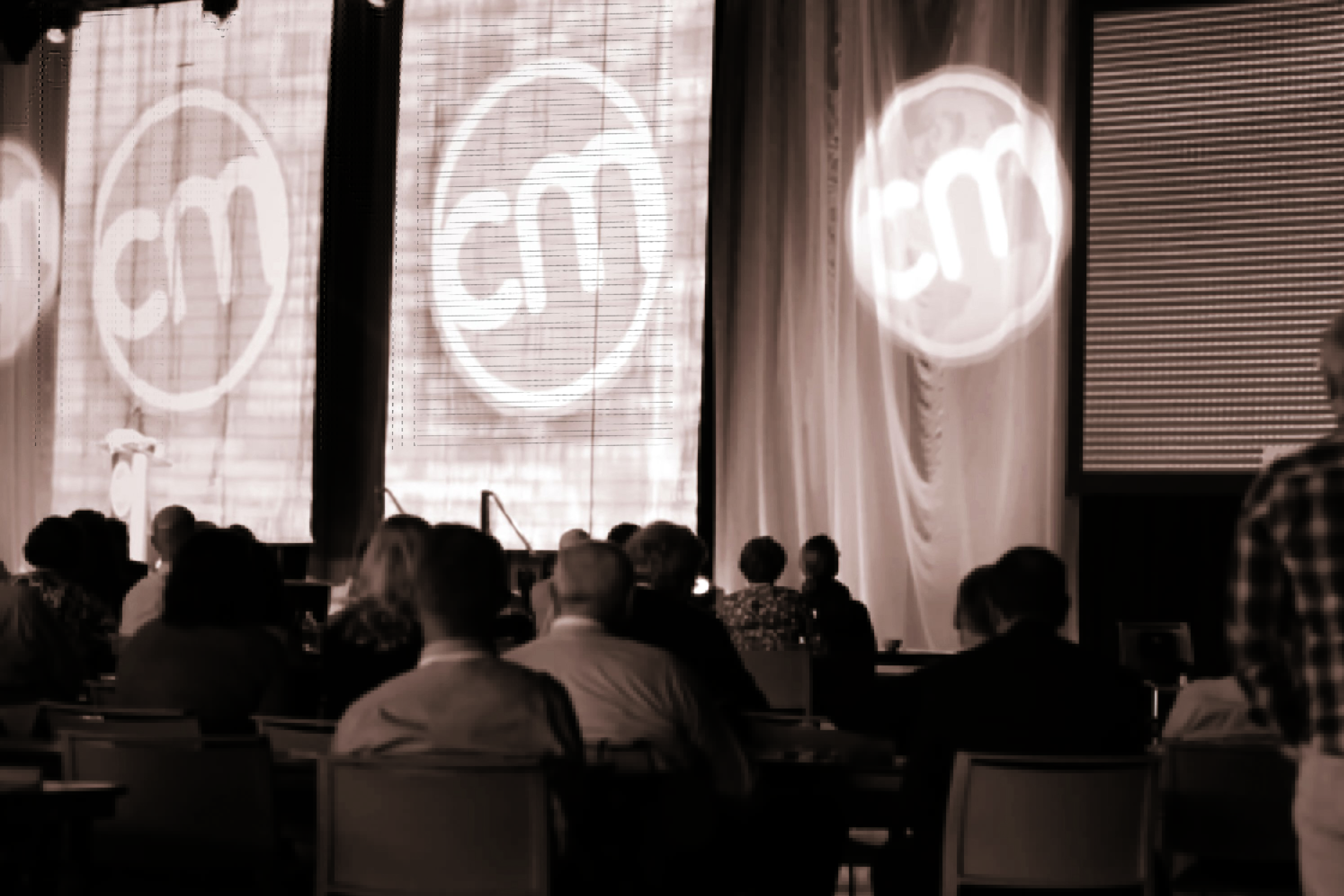