Ad Review: E-Trade Can't Quite Put Away Its Childish Things

'Type E' Effort Is a Move in Right Direction, But First TV Ad Is Awful
READ THIS NEXT
Ad Review: Skittles Makes the Play of the Week

E-Trade had a marketing problem that many companies would love to have: a 6-year-old campaign that was still well-liked by the majority of consumers. Sure, some people thought the talking baby was sort of a jerk, but that was part of his charm. Problem was, the talking baby was not only doing very little to generate new leads, it had become off-brand.

The baby was meant to imply that online investing was so easy even a, well, baby could do it. And the little tyke did perfectly capture that frat-boy, day-trader personality. But E-Trade had outgrown day traders and had its sights set on the type of people more worried about setting up Roth IRAs and planning for retirement than flipping tech stocks from work. And while opening an account on E-Trade might be easy, that sort of planning isn't; it requires knowledge, diligence, patience.

So E-Trade, armed with a new CMO and a new ad agency, took the leap. But, somewhere midjump, the company couldn't decide between a gainer or a 1 ½ in the pike position and ended up belly flopping. 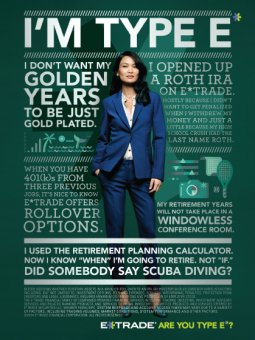 Let's look at the print element first. The campaign is centered on something called the "Type E" personality -- you know, like Type A, but instead of a freaked-out overachiever, someone who just takes retirement planning very, very seriously. It taps into very legitimate concerns about investing and suggests that E-Trade has the tools to address them. Not a horrible concept on which to hang this sort of campaign. And the print work is a perfectly serviceable attempt to define these people and reach out to them.

But the launch TV spot (below) is a travesty of epic proportions. It's as if E-Trade said to itself, "We're going to catch flak for getting rid of the baby, so we have to come up with something funny." 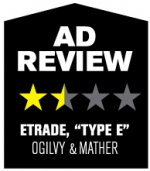 What E-Trade and agency Ogilvy & Mather came up with is, to quote from comments on AdAge.com, "buffoons … dancing around looking like spastic idiots." They're meant to be professionals in all walks of life, but they're dancing about -- "spasmodically jerking," wrote another commenter -- while singing about IRA's.

Sure, internet comments should always be taken with a grain of salt. But the spot is just plain awful. Worse, as our AdAge.com commenter notes, "The TV spot makes the customers look like, ironically, immature babies. I certainly don't associate these folks with savvy investment strategies."

In fact, a couple of commenters said, in effect, "I do not want to be them." This is something that should never happen if your ad aims to present the product and consumer as heroes.

The company is rolling out another round of TV spots with actor Kevin Spacey as talent scout, recruiting Type E personalities. Hopefully, those will be better than what broke last week. They certainly can't be worse.