You'd have to be slightly insane to throw marketing money into the headphone arena these days. Just as Apple and Samsung are sucking up all the oxygen in the smartphone space, Beats and Bose seem to be doing the same in the personal audio industry. Granted, the majority of the country may be simply walking down to the closest Walmart and buying whatever's on sale for $12.99, but if you were to ask the average consumer what the best headphones are, he'd likely say Bose or Beats. 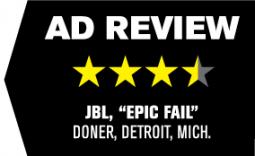 In terms of marketing, Bose is tying up with the NFL as an official sponsor and Beats is tying up with NFL players and just about every other celebrity out there. Beats, in particular, has rolled out solid advertising over the last year, the most notable of which featured star athletes shutting out a world of hate-fueled opposing fans with a pair of Beats.

So when the JBL press release landed at Ad Age HQ, my first response wasn't "How odd," but rather, "How sad."

I was wrong. JBL's new effort for its wireless headphone offerings features normal people -- at the café, at work, on the treadmill -- getting tangled up in their headphones and making asses of themselves. Without getting into too much detail, let's just say I can identify.

And JBL's $99 tag gives it a price edge over competition that starts at $200.

The middle ground is dangerous territory to stake out, though. You're neither high-end nor a bargain. And when it comes to marketing, consumers might prefer lofty goals, no matter how unachievable -- something Reebok learned a few years back when it all but celebrated the mediocrity of our real daily workouts. (We already own that, so sell us the dream of the professional athlete.)

JBL and agency Doner are wise to take the humorous approach in TV advertising and complement it with an engaging social-media play. The company has launched the #cordfail hashtag and is soliciting tweets and videos online as part of a contest. Among other prizes, winners can see their story enacted by Vine star Logan Paul (which I'm sure is a big deal with the kids these days).

Already, consumers are participating. The text under one featured Vine reads: "Not feeling my new hair accessory" and shows a young woman with headphones tangled in her hair. One tweet reads: "Forgot headphones were on, got up, walked away from office desk, cord yanked out, Bieber starts blaring in the office." Oof. Humiliating.

JBL is not only inviting consumers to play along and showing them marketing they can identify with, the company is selling a solution to a real-world problem.

That kind of marketing, I can listen to all day.