Mooncup Makes Sure Your Lady Parts Are Feeling the Love

LoveYourVagina.com Sells This Feminine Device Without Pussyfooting the Issue
READ THIS NEXT
Ad Review: Skittles Makes the Play of the Week

How are you feeling about your vagina these days?

Like, are you cool with it? Are you mildly discontented? Disgusted? Smitten? Vaginawise, would you say you are satisfied with the way it is treating you, and you it? Are you even giving your vagina any thought at all, or perhaps taking it for granted, in the way that many of us take for granted, for example, our bile ducts? 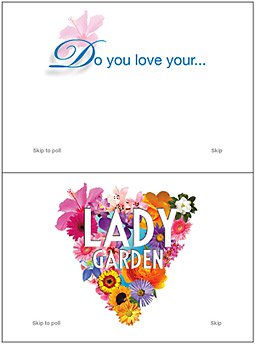 We ask not without reason. What brings this all to mind is a website called LoveYourVagina.com.

These folks don't want you to be vaginally satisfied. They want amor.

Do you love your ... Lady Garden

Do you love your ... Vajayjay?

In each case, the cute little euphemisms are rendered in stylized designs approximating the vulva, as imagined by a team of scrapbookers. Once again, not for nothing. There is a pudenda agenda: LoveYourVagina.com is the website of a British product called Mooncup, which is a silicone menses receptacle designed to replace tampons and sanitary pads. Sort of a diaphragm meets chamber pot, it's a flexible reservoir for menstrual fluids that you scrunch up to insert and slide out to empty.

In that sense, the whole vagina-centricity of the campaign is a bit of bait-and-cooch, since the vagina is only the terminus point of the monthly period. Mooncup merely resides there at the delta, collecting the flow from points north. But fair enough: to switch metaphors slightly, it's also where the rubber meets the road.

One of the supposed benefits of the product is to reduce vaginal dryness, irritation and even contamination by disposable products of dubious provenance. Hence ...

"We think it deserves some love, especially when you think how much love and attention you lavish on your hair, nails, teeth and skin."

Then they show an image of the Mooncup, which looks quite like the top 1/3 of an industrial-strength condom -- upside down -- and conjures some mental pictures that would be hard to make cute. Sure enough, a bit of search-engine enterprise reveals that, while many women swear by Mooncup (and its gum-rubber cousin The Keeper) others have been bedeviled by messiness issues too graphic to detail here. Not to mention sloshing.

"We bet you winced when you saw this," the text says, and the text ain't lyin'. "Everyone does. But there are three reasons why we think it's important that you get to know it."

Actually, two reasons: 1) the aforementioned deleterious effects of paper and cotton, "which often contains bleaches and pesticides" and 2) "Every woman will use an average of 12,000 sanitary products in her life, which can be replaced by one reusable Mooncup." Do you take a mesh sack to the grocery store to save on paper and plastic? Same deal.

We actually think the green pitch is less powerful. Mind you, tampons and pads aren't entirely yuck-free, but for convenience and confidence they retain major advantages. What Mooncup does so well here is position itself as a feminine indulgence -- not for some characterless piece of anatomy but for Lady Vajayjay -- who is suddenly not so much an organ but a pet.

That's why the best part of the site is a poll, letting women (and apparently a number of 15-year-old boys) offer their own pet names. Some of them are charming: Schlippy Shmoo, Baby Bear. Some of them are mean: Palin and Thatcher. And some of them are hilarious: Map of Tasmania; The Downtown Dining and Entertainment District; and Anastasia Beaverhousen.

But as a group they do the trick. You may indeed be indifferent to your vagina. But how in the world can you mistreat Se?or Puss Puss?