Could a Super Bowl Spot Make Us Love Our Government More?

Could a Super Bowl spot help the federal government's image among Americans?

Maybe if it went something like Wieden & Kennedy imagined when Harper's Magazine asked a bunch of creatives how they'd pitch Uncle Sam to America using the Super Bowl.

"America, are you ready for some government?" yells Stephen Colbert during a halftime show sponsored by the feds. Members of Congress dressed in gold suits and powdered wigs march onstage, followed by the executive branch busting through an American flag and the Supreme Court doing a kick line.

Then Oprah rises through the stage wearing a Statue of Liberty costume to yell: "You get a car! You get a car! Everyone gets a brand-new car!"

On second thought, viewers might wonder whether the government was shepherding their taxes very responsibly. The Census Bureau's Super Bowl spot got a little of that kind of criticism last year.

So most of the conversation with Harper's Magazine revolved on how you'd really do it. Its roundtable will appear in the February issue, for sale on newsstands Jan. 20 and available to subscribers at Harpers.org.

The government could certainly use a new marketing program. "I think for starters you can say the number-one marketing challenge the government has is that its primary communications outlet is political campaigning," said Mark Fitzloff, an executive creative director at Wieden & Kennedy, during the magazine's roundtable. 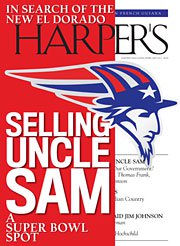 But what works in a Super Bowl ad? Silliness, dancing babies, explosions. That probably won't work for the federal government.

And Washington's reputation is bad enough off that it can't expect a turnaround from one spot -- not even a Super Bowl commercial. "No matter what, you're not going to get people to forget how much they hate Washington by reminding them of the highway system," said Marc Sobier, an associate creative director at Goodby, Silverstein & Partners.

Check out the February Harper's Magazine to see how each agency wound up tackling the brief. In the meantime, anybody have an idea of their own?