The comments about Nike's latest print ad for NikeWomen.com are burning up cyberspace. 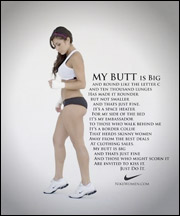 No, not the ad where the Swoosh takes a shot at market-leading toning shoes from Reebok and Skechers. More on that in a moment.

The ad that's drawing attention is a rework of the 2005 "My Butt Is Big " campaign for Nikewomen.com. Bloggers and posters are alternately praising the company for again using "real women' in its advertising, and philosophically dissecting the apparel maker for using an "ethnically ambiguous woman" as the image in the ad when "stereotypically, the commonality or predictably of a big butt rests with black women."

Hmmm. We had questions, though. Lots of questions. Why is Nike repeating a campaign from five years ago, word for word in the text, with only the image changed? Did the work come from longtime agency partner Wieden & Kennedy?

And where are the copy editors? The word "ambassador" is spelled "embassador" in the 2010 print ad.

So we called Wieden, which graciously got back to us in a matter of minutes with, "Uh, it ain't our work."

Nike media rep Derek Kent confirmed what we suspected: The ad's a fake.

In the last week the fake ad has certainly fooled enough folks. ACertainBeauty.com, TheFrisky.com, and TheAtlanticWire.com, among others, wrote some very insightful commentary about those fake ads. 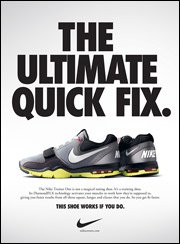 Maybe they should have been discussing Nike's real ads -- and the targets of said ad. "This shoe works if you do," reads the ad, basically suggesting that butt-toning shoes from competitors Reebok and Skechers are more quackery than a valid replacement for old-fashioned, hard-core training.

While there is plenty of skepticism over the physical benefits of toning shoes, it should be pointed out that Nike is playing catch-up after losing market share to its two competitors in the women's footwear category. And Gawker's Hamilton Nolan is quick to point out that Nike's own claims aren't exactly the most scientific in the world.

Mr. Kent said the ad would be "part of an ongoing Nike Women's Training effort to highlight new product innovations. More to come. Watch this space."

When asked if future ads would continue to be somewhat comparative in nature and/or continue to tweak Reebok and Skechers, Mr. Kent said he could not comment on the company's future plans.