One Direction Partners Up (Again) for Toothbrush Launch

British boy band One Direction seems to go through toothbrush-licensing partners as fast as Taylor Swift (former love interest of band member Harry Styles) goes through boyfriends. But don't worry: None of the oral-care marketers who have "exclusive" relationships with the band have cause to sing an angry breakup song. 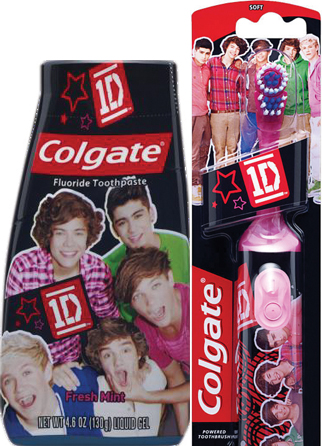 Colgate had One Direction first

How many toothbrush-licensing directions can One Direction take? At least three. All three companies were fully informed of the limited terms of their exclusive relationships at the outset, said Mary Kean, licensing director for Global Merchandising Services, Los Angeles, which represents the band.

Being third to the One Direction oral-care party is still pretty exciting to Church & Dwight, which is currently shipping the musical toothbrushes to retailers. Chairman-CEO Jim Craigie said at the company's Feb. 5 investor conference: "Big new news here folks: We have the exclusive license for a musical toothbrush from the One Direction band." He went on to talk about the band's 23 million singles, albums and DVDs sold, their standing as Billboard's and MTV's top artists of 2012, their already-sold-out 2013 world tour and their upcoming movie.

"This is as hot as it gets," Mr. Craigie said. "And we're already launching toothbrushes with two of their favorite songs on them."

One Direction may not have even scratched the surface yet. Licenses for mouthwash, dental floss, tongue cleaners and sonic toothpicks are apparently still untapped.