Thwarted at the ballot box, Alex Bogusky and some other supporters of genetically modified labeling are encouraging people to "sticker bomb the local grocery" by labeling foods on their own. 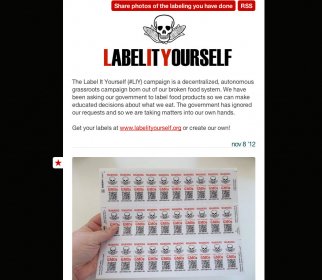 Mr. Bogusky, the former ad executive turned activist, today tweeted a link to an organization called Label it Yourself, which has a website that allows visitors to make their own labels to stick on foods that include GMOs. An accompanying Tumblr page shows a host of well-known brands adorned with the graphic labels, which feature ears of corn growing out of a skull.

Said Mr. Bogusky on Twitter: "I guess now we need to label GMOs ourselves. These folks are making it easy to sticker bomb the local grocery." His wife made a similar plea on Twitter.

Label It Yourself describes itself as a "decentralized, autonomous grassroots campaign born out of our broken food system."

But what they are encouraging would seem to fit the definition of vandalism.

Asked to respond, Mr. Bogusky said in an email: "I'm pretty sure it's illegal if you do it beyond your own cupboard. That's why I don't suggest anybody do it. Just letting them know it's out there."

He's spreading the word about Label It Yourself two days after California voters rejected a proposal to label genetically modified foods in the state.

Label It Yourself told Ad Age this, using an anonymous email account: "We worry we are being denied the basic right of knowing what is in our food so as to be able to make our own decisions about what we eat. If there is nothing to hide, then why hide it, right? And if there is something to hide, then the vandalism done to our bodies as a result of eating this stuff is much worse than the honest labeling of a product."

The Grocery Manufacturers Association, which represents big packaged food marketers, did not respond to requests for comment.