Critics, Comedians Pile On; Company Soldiers Forward
READ THIS NEXT
How restaurant chains are duking it out to be the best in their categories

I think now we can safely say that Groupon doesn't do anything by half-measures.

Its first national retail deal was big: The Gap. Its foray into TV advertising: Super Bowl XLV, baby (with a spot from CP&B). And its first gaffe? That was huge, too.

Those Super Bowl ads, a supposed parody of celebrity charity endorsements (and directed by master mockumentarian Christopher Guest), touched off a fury in the Twitterverse and elsewhere. People complained the spots, starring Liz Hurley, Cuba Gooding Jr. and Timothy Hutton and addressing, respectively, the Brazilian rain forest, the plight of whales and Tibet, were in poor taste and made light of serious issues. 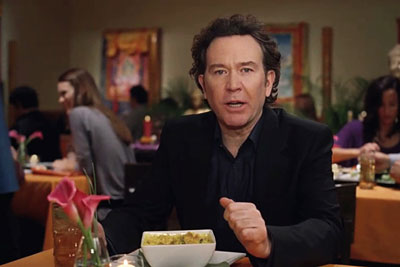 The Chicago Tribune, Groupon's hometown paper, quoted a New Yorker who said he felt like he'd been "punched in the face" when he saw the Tibet ad.

Not everyone hated the ads, which came from CP&B. Ad Age's Ken Wheaton got the joke right away. (Though he was among those knocking Kenneth Cole for his Egyptian-related tweet. He claims the difference is between making a joke about a volatile and fluid situation and poking fun at the celebrity-activist-spokesperson industrial complex. But he would say that, wouldn't he?)

And at least one comedian, Conan O'Brien, had some fun with the spot:

Groupon, for its part, said it is making fun of sanctimonious celebrities -- but it is also supporting the causes it features in the ads.

Guess all this probably could've been avoided if it had said so somewhere in those ads, maybe by way of a web address on the screen at the end or something.

And Groupon is staying true to its rep for going all out: It's not apologizing or backing down. In a post on its blog, CEO Andrew Mason said:

"Our ads highlight the often trivial nature of stuff on Groupon when juxtaposed against bigger world issues, making fun of Groupon. Why make fun of ourselves? Because it's different -- ads are traditionally about shameless self-promotion, and we've always strived to have a more honest and respectful conversation with our customers."

But Mason did say in the post that Groupon will tweak the ads to make clear that the group-buying company is, in fact, supporting the causes in the spots: "In fact, the feedback led us to make changes to the end of our ads that further encourage our fundraising."