Kilmer-Purcell -- Author, Adman, Former Drag Queen -- Tries Farming, TV
READ THIS NEXT
How restaurant chains are duking it out to be the best in their categories

Josh Kilmer Purcell has been a drag queen and a New York Times best-selling author ("I Am Not Myself These Days") and is a creative director at JWT, New York. But tonight, he and partner Brent Ridge, a gerontologist and former health consultant for Martha Stewart, will add "reality star" to their respective resumes. 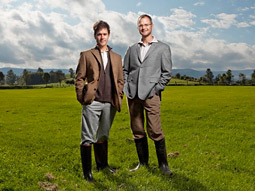 'The Fabulous Beekman Boys'
Messrs. Kilmer-Purcell and Ridge are "The Fabulous Beekman Boys," a new reality series airing Wednesday nights on Discovery Communications' Planet Green network. (What channel's that, you may ask? Click here to see if you have it.) The series chronicles the alternate life the couple started together in 2007, when they bought a 200-year-old mansion with a 60-acre farm in upstate New York, called the Beekman Estate, and turned it into an organic farm. It's "Green Acres" meets "Queer Eye for the Straight Guy" with a little bit of "Real Housewives" tension thrown in. Mr. Kilmer-Purcell also wrote a book about the experience, "The Bucolic Plague: How Two Manhattanites Became Gentlemen Farmers," recently publisher by HarperCollins.

Now as Mr. Kilmer-Purcell spends his weekdays working on campaigns for clients such as HSBC and Kimberly-Clark (JWT's Manhattan offices get a fair amount of screen time), he spends his weekends on a farm surrounded by a camera crew as he and Mr. Ridge make products like goat's milk soap, "blaak" cheese and black onion jam from scratch for Beekman 1802, their namesake organic lifestyle business. Although primarily a two-man operation, the Beekman boys receive the occasional aid of supporting cast members like Farmer John, who helps raise the farm's 80-plus goats and is prone to the occasional emotional outburst.

Adages caught up with the Beekman boys on the eve of their reality TV debut to see how they balance Manhattan media careers with rural farm life, what they've learned from Martha Stewart and potential storylines for the second season of "Beekman Boys," already ordered by Discovery.

Adages: You guys have been on a pretty restless publicity tour, appearing everywhere from "Martha Stewart" to CNN to "Wake With Up Al Roker" on the Weather Channel. What's the hardest part about balancing the new demands of reality stardom with your day jobs?

Brent Ridge: This is such a busy time of year anyway on the farm, the second season of cheese is coming out of the cave, so I have to do that distribution. I haven't had time to sit and think about it -- or feel sorry for myself. This is my schedule, it's just another day on the farm. I'm going strong.

Josh Kilmer-Purcell: For me it's more taking time off from the agency. This is my vacation. I've taken a little bit of time off of work, so I'm only up there on the weekends and I've got the same amount of chores. Brent doesn't cut me any slack.

Mr. Ridge: That's right, he has the same amount of work, he's just complaining more about it.

Adages: Josh, how did your colleagues at JWT feel about letting cameras into the agency during the filming?

Mr. Kilmer-Purcell: JWT has done a lot of integrated entertainment marketing so they totally get it. And I'm not giving away any pitch ideas or anything. I think everybody is having a pretty good time with it.

Adages: What about your clients? What do they think about the show?

Mr. Kilmer-Purcell: I didn't proactively tell any of my clients, I just started getting feedback from them as they were reading articles about the show. I don't think there's anything in there that will completely mortify me.

The truth of it is I've learned more about business by starting and running our own than I've learned in 15 years of advertising. Beekman 1802 doesn't have a marketing budget, and everything we do is social media or PR or interactive -- all that learning I've had to do while keeping this business afloat.

Adages: In many ways "The Fabulous Beekman Boys" is like an infomercial for your Beekman 1802 products.

Mr. Kilmer-Purcell: But the most entertaining infomercial you'll ever see.

Mr. Ridge: Except for maybe the one Cher did.

Adages: Brent, what did you learn from your time with Martha Stewart that you've been able to apply to the Beekman business?

Mr. Ridge: She's a very detail-oriented person, and when you're trying to run a detail-oriented business someone has to crack the whip and make sure things are getting done. I learned a lot form Martha on how to get it all done.

Adages: Has she seen the show?

Mr. Ridge: She loved the TV show -- she kept calling it a sitcom. She got the humor in it. She loves our shows, and sampled our new product, the black onion jam, which is a condiment that goes on pork or chicken. After it was on her show our sales went through the roof.

Mr. Kilmer-Purcell: She's been so supportive as a mentor to Brent. If you ask her what she does she says she's a teacher. I think she's excited to see what she's been able to teach.

Adages: Any lessons you've learned from Martha in how to build a media empire as well? You've got a Planet Green series, a book deal.

Mr. Ridge: I think that we're really one of the first new companies that has launched as a fully integrated media company, whereas most companies started as media and rolled out product. We have a book, several lines of products available, and great partners.

Adages: Where can people buy your products these days?

Mr. Ridge: Our soaps are sold through Anthropologie, our cheese is at Murray's and Fairway and several other cheese shops, and we're just entering Whole Foods in the Northeast later this month. Everything is available at Beekman1802.com as well. We have some artisanal products which you can only get there. Part of the foundation is to help support American craftsmanship so we go and find local craftsmen around our farm, a blacksmith letterpress stationary, quilters, we design products that use their handy craft skills. We create heirloom linens, some products with a blacksmith, just some really amazing stuff.

And for the next four months we have a pop-up shop in ABC Carpet in New York, which is a home display where people can purchase those products in that setting.

Adages: Planet Green has already ordered a second season. Any potential storylines for next year?

Mr. Ridge: This next year is about growing the business and seeing it take off and helping us support the farm and our village.

Mr. Kilmer-Purcell: And what about me, Brent? Coming up to the farm full-time?

Adages: You'll believe that when you see it, won't you Brent?