Marie Claire blogger Maura Kelly thinks it's icky when overweight people show affection for each other. 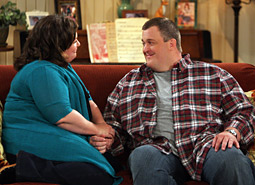 Kelly hangs her disgust on the new CBS show "Mike & Molly," in which two fat people have the nerve to fall in love and kiss once in a while, proving that you don't have to be on a weight-loss show to be overweight on TV.

Kelly is generous enough to give Mike and Molly "points for trying" because the characters did meet at an Overeaters Anonymous meeting. Oh, and she points out that some of her best friends are fat. Or, rather, plump. But she's pretty tough on the whole.

"To be brutally honest," Kelly continues, "even in real life, I find it aesthetically displeasing to watch a very, very fat person simply walk across a room -- just like I'd find it distressing if I saw a very drunk person stumbling across a bar or a heroine addict slumping in a chair."

Interesting, this, from a magazine that features a plus-size fashion column, Big Girl in a Skinny World, by the super stylish size 18 Ashley Falcon. Also a magazine that took to task so-called health bloggers for "an arguably unhealthy obsession with food, exercise, and weight."

Magazines in general have actually been doing a little better at dialing down their unrealistic portrayals of women (Avril Lavigne's missing elbow on this recent Maxim notwithstanding).

Despite that, or perhaps because of it, the response to Marie Claire's post about "Mike & Molly" was fast and harsh. "This has to be a (disgusting) PR stunt by Marie Claire," one commenter wrote. "They had to know an article like this would cause controversy. Shame on Maura Kelly for actually writing this disgusting insensitive article."

A spokeswoman for Marie Claire said Maura Kelly is a "provocative blogger" who was also "extraordinarily moved by the thousands of responses she has received following her post about 'Mike & Molly.'"

And Kelly has now expressed regret in an update to her original post. "I would really like to apologize for the insensitive things I've said in this post," she wrote. "Believe it or not, I never wanted anyone to feel bullied or ashamed after reading this, and I sorely regret that it upset people so much. A lot of what I said was unnecessary; it wasn't productive, either."

Well, that's not entirely true. It seems to have been productive for Marie Claire's site, at least: The comments are pouring in. "Marie Claire" is trending on Twitter. Tongues are wagging; fingers are flying across those keyboards. There are probably some TV producers ringing up, too.

But hash tags such as #unfollowmarieclaire have sprung up; lots of those comments are promises to cancel subscriptions; and feminist blogs such as Gawker Media's Jezebel are hopping mad: "What the hell were they thinking? Because as if the title 'Should Fatties Get a Room? (Even on TV?)' wasn't bad enough, there's the article itself."

Kelly really sums it all up very nicely herself in the second paragraph of her column: "I can be kind of clueless."