Tim Tebow is so popular he even inspires lawsuits.

Nike filed suit against Reebok on Tuesday, claiming that its competitor is using Mr. Tebow's name without permission on Reebok-made apparel and replica jerseys bearing the quarterback's No. 15 in the wake of his trade to the New York Jets on March 21. 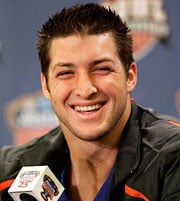 Reebok's 10-year contract as the NFL's official uniform supplied is ending; Nike takes over in a new five-year deal that begins on Sunday, April 1. The suit, claiming a misappropriation of rights and unauthorized and improper use of Mr. Tebow's name, was filed in federal court in New York. Nike is asking for "preliminary and permanent injunctive relief, compensatory damages, punitive damages and attorneys' fees."

Nike claims Reebok has no agreement with the National Football League Players Association to use Mr. Tebow's name, or an agreement with Mr. Tebow himself. The quarterback signed an endorsement deal with Nike in March of 2010 after graduating from the University of Florida.

Part of the complaint read that "Reebok has taken upon itself to illegitimately seize on this unique and short-lived consumer opportunity in order to capitalize on the public's short-lived intense consumer appetite for such products, and to prevent Nike from doing so."

Mr. Tebow had the league's second-biggest selling jersey last year, behind only NFL MVP Aaron Rodgers of the Green Bay Packers. Last season he played for the Denver Broncos, but was just traded to the New York Jets.

In its suit, Nike noted "the demand for Tebow-identified Jets apparel arising from last week's trade is intense during a normally subdued time period for NFL merchandise sales, and at a time when Nike is going to extraordinary lengths to build up demand for its soon-to-be released NFL product offerings. Based on the upcoming April 3 unveiling of the Nike -supplied official New York Jets uniforms and apparel for use in the 2012 season, demand for Tebow-identified Jets apparel would be expected to continue to increase. However, unless restrained, Reebok's distribution of unauthorized Tebow-identified Jets apparel will preclude Nike and its licensors from fully realizing the unique opportunity presented by the convergence of the Tebow trade to the Jets and the announcement of the new Nike NFL uniform."

Ironically, it still hasn't been determined if Mr. Tebow will wear No. 15 with the Jets since a player whom New York just re-signed on Tuesday, Scotty McKnight, wore the number last year.