Sid Evans Goes on and Gits to Garden & Gun

The bear-wrestling, fish-killing crews of Field & Stream and Outdoor Life gathered last week to say goodbye to Sid Evans, the former editor of Field & Stream, who's trading in a New York desk and the great outdoors for some time puttering around in the garden and an office in Charleston, S.C. The good news for Sid is he'll still get a chance to play with guns in his newish role as editor in chief of Garden & Gun, perhaps the best name to happen to the magazine industry since Geezer Jock. 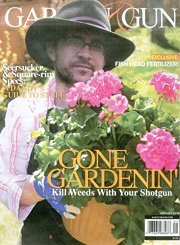 Of course, it's long-standing tradition that when a high-ranking editor leaves a publishing title, a mock cover is done. Sid's former co-workers liked him so much (or, rather, had so many jokes to make at his expense) that they mocked up two covers: one of Garden & Gun, the other of Field & Stream. The Field & Stream cover, featuring Sid in full hunting gear, had the better cover lines. Some examples: "This Man Survived Brooklyn Heights. Could You?"; "How To: Raise a Pansy, Hunt Deer in Your Garden, Snag the Only Editor's Job in Charleston"; and "150 Best Gardening Spots."

While Sid's already been on the job for a while, he and wife Susan haven't made the move to Charleston yet and seemed little apprehensive about relocating from Brooklyn Heights to the South, where?speaking from personal experience?folks talk funny and everything shuts down after 9 p.m. But Sid's from Memphis and Susan, a lawyer, is from Nashville, so they'll likely adjust rather easily.

Also on hand for the occasion: Field & Stream and Outdoor Life Group Publisher Eric Zinczenko, who was kind enough to offer to take me hunting; David Dibenedetto, editor of Salt Water Sportsman; and Women's Health Senior Fitness Editor Jenny Everett, who claimed that among many of her job requirements is the ability to do a handstand.

Of course if one editor's leaving, that means another's taking over. Stepping into the lead editing role at Field & Stream is Anthony Licata. I couldn't tell you much about his editorial skills, but I do know that Anthony likes barbecue and bourbon, which is all I need to know about anyone. He's also been dubbed a "Tennessee Squire" by the folks at Jack Daniels. Good enough for Lynchburg, good enough for me.