Affluency: Media Use in Extraordinary Times 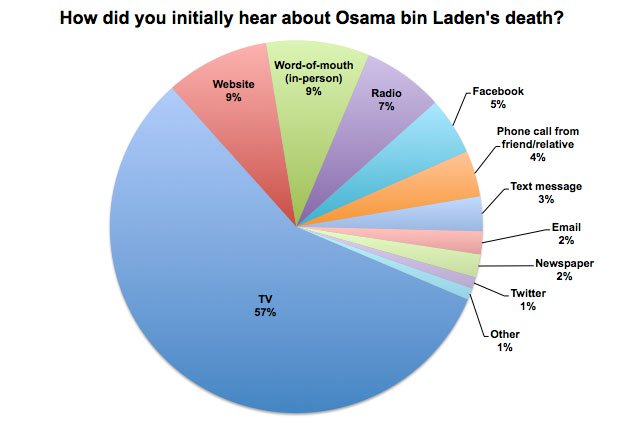 We have been studying media use during extraordinary circumstances -- the kind that generate flashbulb memories -- and saw an opportunity to study those dynamics in relation to the death of Osama bin Laden. Three weeks after his killing, we conducted a study of American Affluents (defined as those with annual household income of $100,000 or more), as well as a general population sample (less than $100,000 HHI), hoping to collect quantitative data and qualitative recollections of the event that were relatively uncontaminated by the cognitive biases that creep up over time.

We'll focus on the results from the Affluents in this article, but while their media consumption habits normally differ from other groups, there were relatively few differences during this breaking news event between the groups on key measures.

We found that 57% of Affluents learned by TV, perhaps not surprising given the timing of the event. It was Sunday evening, many were home and preparing for bed, often with their typical pre-bed ritual of watching local news (among the Affluents, local news is the most widely watched of the 25-plus TV genres we measure). In addition, the announcement itself was preceded by an unusual "pre-announcement" from the White House, no doubt causing many who would have turned off the television to stay tuned.

If 57% learned from TV, then -- strikingly -- 43% did not. These individuals reflect the tremendous diversity and fragmentation of today's media landscape. No other medium -- including websites, radio and good old personal communications -- garnered more than 10% of the population. Five percent found out from Facebook, which is clearly not just for fun any more, and increasingly serves as a conduit for news and information.

Hearing the news was clearly a flashbulb memory for many. Open-ended descriptions of the events are detailed and vivid -- essentially none of our 2,000-plus respondents gave us a "don't remember" answer. It is also clear that , as awareness of the event began to circulate, and consumers "dug deeper" for information, there was a "flight to quality," and a strong reliance on traditional media and trusted brands. Eighty-five percent watched coverage of the event on TV, with network TV outpacing cable news channels. Half read about it on the internet, essentially tied with the number following the events in the newspaper. In March, we had asked similar questions about the earthquake, tsunami and nuclear crisis in Japan -- not vivid enough for flashbulb memories among some, but certainly a time of intense media consumption, and we discovered a very similar pattern of results.

In the final analysis, the results tell us much about media use in extraordinary times. TV remains the predominant source for breaking news, and more fundamentally, a binding force in American culture. The deaths of print, network news and traditional media are all greatly exaggerated. And while fragmentation is apparent in casual information gathering, there is a strengthening of "flight to quality" and reliance on trusted brands as consumers dig deeper in times of crisis and uncertainty.

ABOUT THE AUTHOR
Bob Shullman and Stephen Kraus are president and chief research and insights officer of Ipsos Mendelsohn, respectively. The Affluency column appears monthly on AdAgeStat.