Twin-conomics: 10 (Times Two!) Stats About How Fertility Is Creating a New Market

AdAgeStat and @adagestat will be on a brief hiatus, other than our weekly Foursquare chart. Here's why:

I used to think I was as average as could be. I was a white, middle-class, Midwestern, suburban male in a family with married parents and a sister. We didn't have a white picket fence, but we might as well have. I'm left-handed, so at least I was in one minority.

The demographics of the U.S. have changed a lot in my Gen-X lifetime, leaving me in fewer majorities. But nothing changed my own profile as much as this simple question:

"How do you feel about a big family?" asked the ultrasound technician.

My new demographic drives it in a minivan. To Costco.

If it seems like there are more twins than there used to be, it's because there are. Many, many, more. More parents are having babies later. Counter-intuitively, the odds of having multiples goes up as you get older. That's without fertility treatments, which can account for up to 40% of multiple births, according to the Center for Disease Control. That means 60% happen naturally. As an aside, it's kind of presumptuous to ask, and parents of multiples see right through the veil of, "Do twins run in your family?" 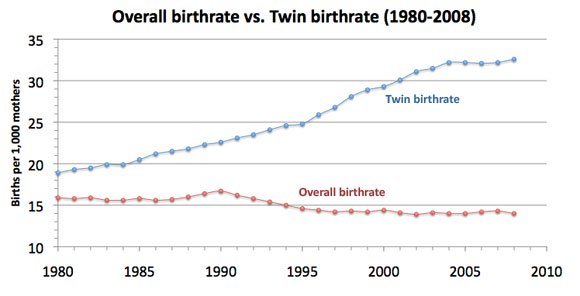 Here are 10 (time two!) top facts about twins and multiples. Then we'll talk about why this all matters to you, perhaps even more than it matters to me.

So why does it matter to marketers?

This blog is, at the end of the day, about understanding your consumers, segmenting them, targeting them, and learning why they buy what they buy.

Again, using myself as an example for this post, I am suddenly making myself much easier to target , and my buying patters are going to become very clear and set for the foreseeable future.

Making me easier to find is a boon because I will be moving from a household type that typically spends 118% of the national average on consumer goods and services to one that spends 157%. I will spend more than average on ... let's check the Consumer Expenditure Survey. ... Just about everything. 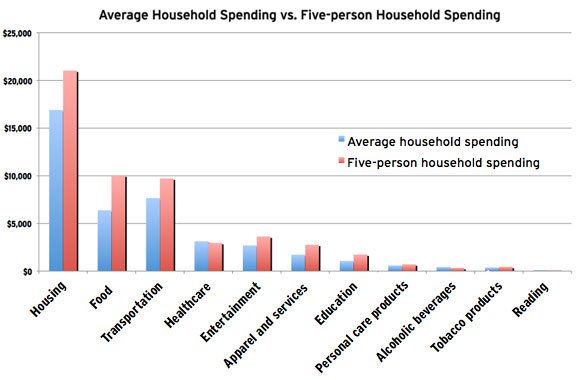 Some highlights of spending patterns in households of five:

In short, if you have a product or service to market to someone with more kids under three than hands to carry them, I probably need to consume it, and likely more than one of it. You can guess all of this from my new demographic, which is growing and needs some pretty specialized products and more than most of other kinds of products. Like diapers. Lots of those. You're welcome.

Reaching me is going to be slightly more challenging than usual, however. My TV consumption is likely going to drop off markedly in the near term. My lap will be overtaken with babies, not laptops, so internet consumption will switch to my mobile device.

Now I know what you're thinking, and yes, reaching my Mr. . Mom of Twins is pretty important, too. But hey, I buy toys, too, and not just ones that come with USB cables.

My credit card is standing by. How do you plan to reach me?