The Great Disappearance of Wealth

U.S. Households Lost Income at an Alarming Rate in 2009
READ THIS NEXT
How restaurant chains are duking it out to be the best in their categories

From 2008 to 2009, the U.S. lost 1.2 million households with income over $100,000. We reported that number in a story for the Consumer Issue about the affluent market, but let's dig a little deeper into just what that means, who those householders represent and where they are. Or were. 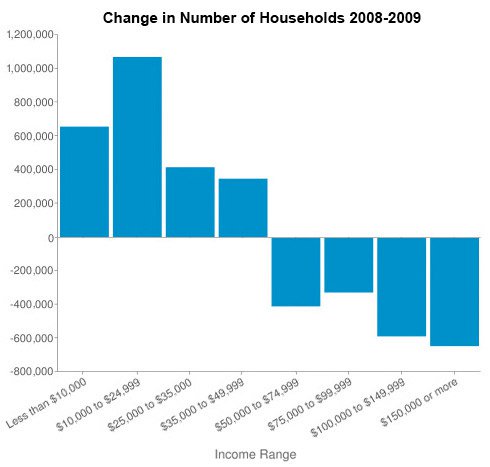 First, let's recap why this number is important. I mean, we know we're in a recession, right? It's important because, according to Bureau of Labor Statistics data, the affluent group accounts for 38.5% of total consumer spending in the U.S. Each of these households spends, on average, $94,244. That figure is just less than twice the median income for the U.S. as a whole, which is roughly $50,000. So we're looking at people who really drive the economy. Losing that many of them, in one year, is a bad, bad thing.

There were 34 states that gained population between 2008 and 2009 but lost affluent earners. We put together an index of how states gained in population, but lost high-earners. Leading the way was Texas, which gained just more than 100,000 households and lost 65,000 affluents. California, North Carolina, Ohio and New York round out the top five. Maryland, West Virginia and South Dakota fared best with relatively small changes in both. Maryland, West Virginia, Iowa and North Dakota were the only states that added high-earner populations, along with Washington, D.C.

All of this is obviously bad news for the economy. The good news is that it doesn't knock us back too far -- yet. Even with the losses, the number of top-earning households have actually increased since 2007 and are up nearly 75% from 2000. While not adjusted for inflation, the U.S. shows significant gains in the last decade, economically. The number of households with incomes under $50,000 dropped 7.6% and the number making more than $100,000 grew 28.7%. We can all hope that the reversal of literal fortune won't last too long. That said, the 2009 American Community Survey is full of troubling data offering us a sneak preview of what might be a very depressing Census 2010 for anyone trying to sell anything to anybody.

Stay tuned. In the coming weeks we'll be looking in detail at the data that will most impact your marketing plans. This stat is the tip of the iceberg.