Think the Adult Population Is Getting More Diverse? Wait Until You See the Kids
READ THIS NEXT
How restaurant chains are duking it out to be the best in their categories

While the 2010 Census is meant to give us a detailed snapshot of the population as it stands today, the early results are also forecasting big changes to come. This half of the nation is becoming more diverse at a rapid pace starting with children. This will have profound effect on marketing in future years, particularly that which is directed at families with children. It will also impact ethnic targeting and media consumption habits.

Of that total population, 101.2 million were adults and 33.3 million were children under age 18. Since 2000, the adult populations in those states have been increasing more than twice as fast as the children: Adults rose 13.5% vs. only 5.7% for children. But all of that growth in children was because the number of minority children increased rapidly while the number of White, non-Hispanic children dropped 7.8%. 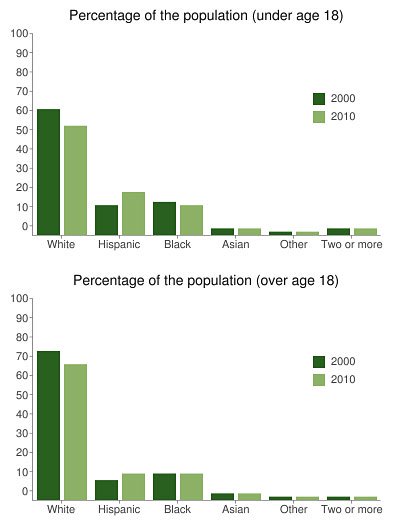 We know that in just about every city and state, the population growth has been driven in the last decade by the increase in the Hispanic population. What the new data is showing is how that growth will continue -- fueled by new births, perhaps even more than immigration. Coupled with the decrease in the birth rate for non-Hispanic Whites, we'll be looking at a very different America in the coming decades.

Peter Francese
View all articles by this author