Where Did All the Money Go?

We all know the saying "follow the money." But what happens when you follow the people and the money? You find that they're not always moving in the same direction.

A couple of months ago we were intrigued by an interactive graphic from Forbes looking at county-by-county immigration based on IRS data. No agency is in a better position to know where people live and where they lived last year than the one charged with collecting money from us. With the advent of the earned income tax credit, more people are filing returns than ever, so this data gets better and better.

But Forbes wasn't interested in the portion of the data that we were interested in. Forget the people. Where's the money? Thankfully, the IRS can tell us that, too.

Along the same lines, the Martin Prosperity Institute at the University of Toronto's Rotman School of Business took a look at population growth in the U.S. metro areas and compared it to income growth in those same areas. The institute, directed by Richard Florida, found a definite trend line showing that areas with explosive population growth in the last 25 years were harder hit by the recession than other areas.

If more people left a county than moved to it, they had a net loss based on migration. They could still have had a gain in population via births, immigration from outside the U.S., etc. There were counties that had a net loss of migration population and also lost aggregate income. Big urban counties such as Wayne (Detroit), Cook (Chicago), and Los Angeles had negative net income and migration. Some (pre-recession) boom areas such as Las Vegas and Phoenix gained both, as did L.A.'s neighbor, San Bernadino.

But the interesting things are the areas where income and population influxes are happening at different rates. Take a look at these two maps. 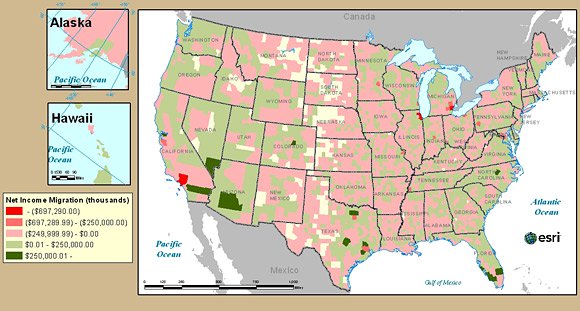 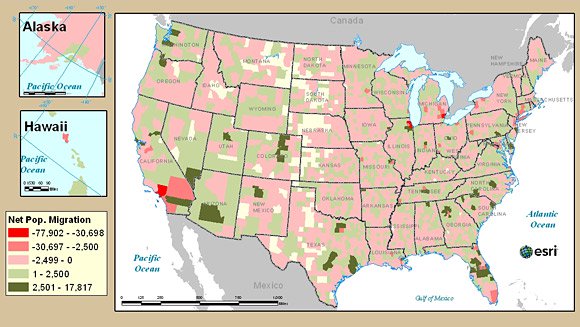 Seattle/Tacoma and Portland in the Northwest, Provo, the I-25 corridor north of Denver, the urban areas of the Carolinas and Nashville, for instance, had some of the greatest population increases without corresponding gains in income.

Florida had the most interesting data. Central Florida from Orlando to Tampa gained population, yet it was the Fort Myers, Cape Corral and Ft. Lauderdale areas that gained income.

Large metro areas such as Chicago, Houston and Atlanta had very different patterns of migration. Chicago had migration to its southwest suburbs that outpaced its income growth. Houston had a net loss of income in central Harris County but net gain in the suburban counties of Montgomery and Ft. Bend as population had a net increase in all three. A similar pattern is seen in Atlanta, Dallas and Austin.

It's a little hard to draw a definitive conclusion without some additional data -- and there are some issues with the IRS data, which will only look at counties with at least 20 households moving in and out, for instance.

The first thing one notices is the migration of both people and cash out of rural areas across the U.S. A somewhat disturbing outcome seems to be that higher-income people are leaving the biggest cities, while the lower-income families are concentrating in urban areas, which traditionally have higher costs of living. That doesn't bode well for the disposable income levels of our urban cores,especially because this data is from right before the burst of the real estate bubble and the recession kicking into high gear. This data is also from the last year that we had significant migration. The housing and job markets are keeping more people in place now.

Keep an eye on these areas as the Census 2010 data starts rolling out next year.