No More Raspberries for BlackBerry 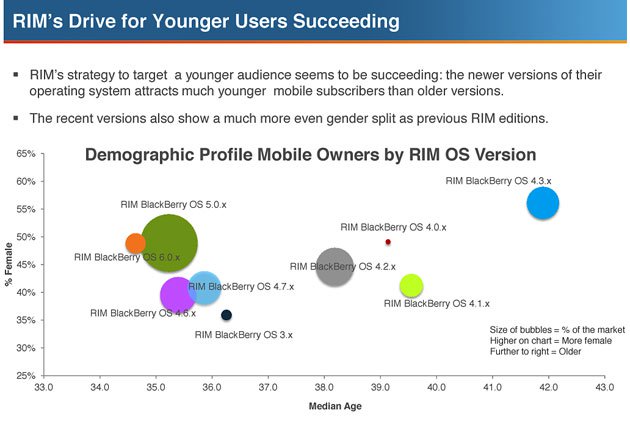 BlackBerry parent Research in Motion launched the Torch last summer -- a touchscreen with a slide out keyboard -- with ads featuring a San Francisco bike messenger and a hip chick in a Brooklyn-esque coffee shop. It seemed to be trying a bit too hard, sort of like Austen Powers saying "I'm hip, I'm with it," but people clearly bought it. Now its turning to the app market to prove that yes, you can find the apps and use them on one of their phones. Its current campaign is an interesting new take on advertising for mobile devices. Rather than showing scary sci-fi-ish space robots like Android or happy friendly apps like Apple, RIM tells us that we don't really want all those apps the others guys have, you want our more utility-driven and really useful ones (like Poynt, which is a grown-ups version of Foursquare combined with the Yellow Pages). Let's see what this chart looks like in another six months. A company once written off may be back in the game. Thanks advertising, you really work!

For this and other useful insights for marketers on the rapidly changing dynamics of the mobile market, check out the Mobile Marketing quarterly series and the recently updated primer, What You Need to Know About Mobile Marketing 2011.