Stat of the Day: Which NFL Teams Draw the Best Playoff Ratings?

Also, Which Markets Tune in After Their Teams Are Eliminated
READ THIS NEXT
How restaurant chains are duking it out to be the best in their categories 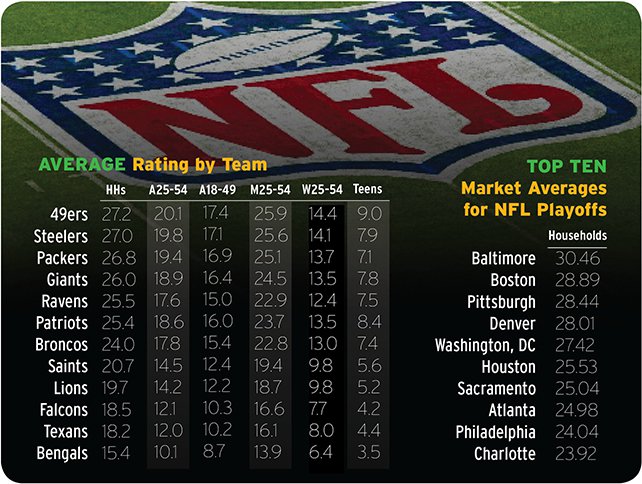 But seriously, folks, how 'bout them Vikings and Cardinals fans. They're so dedicated to their sport that they posted huge viewerships for the NFC Championship game between the Giants and 49ers. Each market had a 33.4 rating despite having no horse in the race. TVB crunched Nielsen data based on the average LPM ratings and came up with a ranking of the highest-rated NFL playoff games for markets with no home team competing. Washington, D.C., followed with a whopping 33.2 for the Wild Card matchup between the Steelers and Broncos. Chicago tuned in to see the much-loathed Packers lose in the divisional round, but then they were done watching, by the looks of these ratings .

Overall, TVB finds the 49ers drawing the best ratings of any playoff team, followed by the Steelers, Packers and Giants. And the mighty un-un-defeated Lions? Despite making the playoffs for the first time in, cough, a while, the Lions barely cracked the top 10, posting a 19.7 rating to rank 9th.

This is especially interesting data in that the teams that draw the top ratings aren't drawing them just from local markets. San Francisco doesn't break the top 10 local markets, which are lead by Baltimore and Boston.

Feel free to print out the above graphic to crib from at your Superbowl parties this weekend. Seventy-eight percent78% of partygoers find the stats geeks the most interesting folks in the room.*

This is our inaugural post on the subject of local market TV ratings , but we'll be digging into more stats like this from TVB in the coming months.