When It Comes to Education, Men Are Getting Schooled | Ad Age
Skip to main content
Sign In Register

When It Comes to Education, Men Are Getting Schooled

Women Outnumber Men in Earning College Degrees for First Time in U.S. History
READ THIS NEXT
How restaurant chains are duking it out to be the best in their categories

For the first time in American history there are now a million more female college graduates than male. As recently as 2000 it was the opposite: There were a million more men than women with a bachelor's or graduate degree.

Since 2000, the number of men age 25 or older has risen 12% compared with a 10% increase for women. The result is that the over-25 gender gap closed somewhat such that there are now only 7 million more women than men age 25 or older. 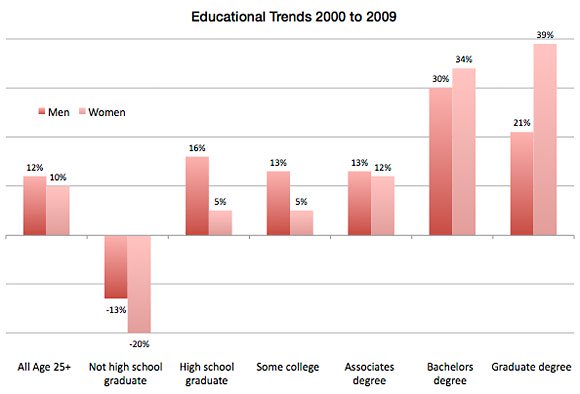 For all types of higher education, the number of women earning degrees is rising faster than the number of men earning the same degree. But it looks like men, who are almost always outnumbered by women in college classes, are dropping out of college at a somewhat higher rate than women.

The number of men and women who have not graduated from high school has diminished by nearly 6 million, but unfortunately there are still almost 30 million men and women who lack even that basic level of education.

It is pretty clear that in a global, information-based economy where most of the higher paying new jobs will require some degree of higher education, women will have an advantage. As that advantage grows, the pay gap between men and women will most likely diminish, with possible consequences for family formation.

Likewise, it's pretty clear that women will continue to be a growing powerhouse of consumer spending. When comparing spending averages of those with and without college diplomas to national averages, graduates outspend the average in just about every one of the 100-plus product categories tracked by the Bureau of Labor Statistics. Conversely, non-graduates spend less almost across the board while having a larger percentage of their income coming from unemployment compensation and public assistance.