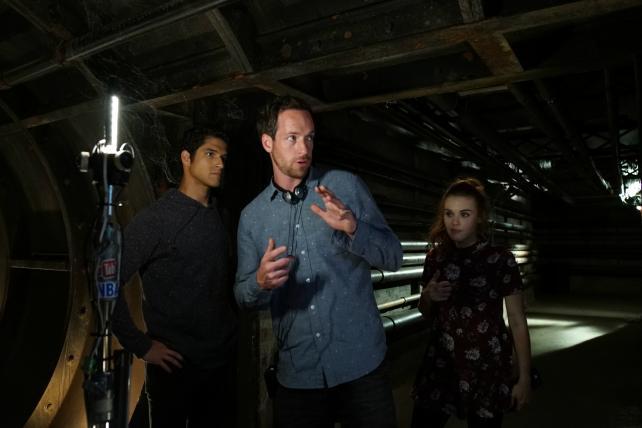 Fans of virtual reality and "Teen Wolf" are in for a treat at this week's Comic-Con in San Diego. MTV is introducing the first "gaze-activated" VR experience with live action, in which a viewer's "gaze" within a 360-degree video affects the outcome of a scene.

AT&T, a partner since the show's first season, is sponsoring the "Teen Wolf" VR experience. It will premiere at Comic-Con's preview night and can be viewed through an Oculus headset at MTV's booth from Thursday to Sunday.

"This is a true extension of the show with completely new technology," said Matt McDonough, senior director of digital strategy and fan engagement at MTV. "We always try to get fans more involved."

The VR experience offers a glimpse of what to expect in season six in two different "Teen Wolf" adventures. In one scenario, the viewer is in a library with characters Malia (Shelley Hennig), Liam (Dylan Sprayberry) and Mason (Khylin Rhambo). Viewers can look at every corner of the library in the 360-degree video. The pace of the scene and appearance of a ghost rider, the show's newest villain, play out differently based on the viewer's gaze and movements.

In another scenario, the viewer is in a dark underground tunnel with Scott (Tyler Posey) and Lydia (Holland Roden). While they beg you not to look at the approaching ghost rider, it is entirely up to the viewer to listen to or ignore them; the scene will change based on that decision.

MTV teamed up with Moth+Flame, a virtual reality agency with experience in cinematic VR and "gaze-activation" technology, to create both scenes that were written by one of the show's writers.

"Interactive storytelling is kind of the future of where everybody wants to go," said Moth+Flame director Kevin Cornish, who first used gaze-activated technology in a piece titled "Believe VR." "It creates a more immersive experience."

"With MTV, we wanted to tap into what the fans love about the show and do it in a way that implements this subconscious interactivity," he added. "It's changing based on your behavior but you don't know that it's changing."

"What I like about this interaction is that it's so subtle," Mr. McDonough said. "It's a true tease that'll leave fans with a lot of questions."

Mr. McDonough is expecting an average of 1,800 visitors per day to MTV's Comic-Con booth.

In addition to the VR experience, MTV will screen a "Teen Wolf" season six trailer and hold a panel with creator and executive producer Jeff Davis and cast members Mr. Posey, Ms. Roden, Mr. Sprayberry and Mr. Rhambo at Comic-Con.

Fans who are unable to attend but want to try the "Teen Wolf" VR experience can visit an Oculus store. Non-interactive versions of the 360-degree videos will be available on Facebook and YouTube.

"It lets fans everywhere have access to this content but at the same time, it rewards die-hard fans at Comic-Con by giving them a slightly elevated version of it," Mr. Cornish said.

In addition to the tunnel and library scenes, MTV will release 360-degree videos of behind-the-scenes footage this week. Fans will get to see the show's wardrobe with Ms. Roden and a tour of the on-set hospital with actress Melissa Ponzio.

Distributing the 360-degree video on social platforms will not only increase the audience for the experience but also benefit the brand. "There's a real value to marketers today because of the way Facebook algorithms work," Mr. Cornish, who has collaborated with Chanel, Donna Karan and AT&T, said. "You can drive substantial impressions with 360-video. It's moving the medium out of the experimental space and more into the R.O.I. space."