Democrat Chris Peterson and Republican Spencer Cox call on citizens to 'stand united' no matter what the 2020 election outcome
READ THIS NEXT
Steve Carell is an overbearing, stress-eating, work-from-home Santa in Xfinity's holiday ad 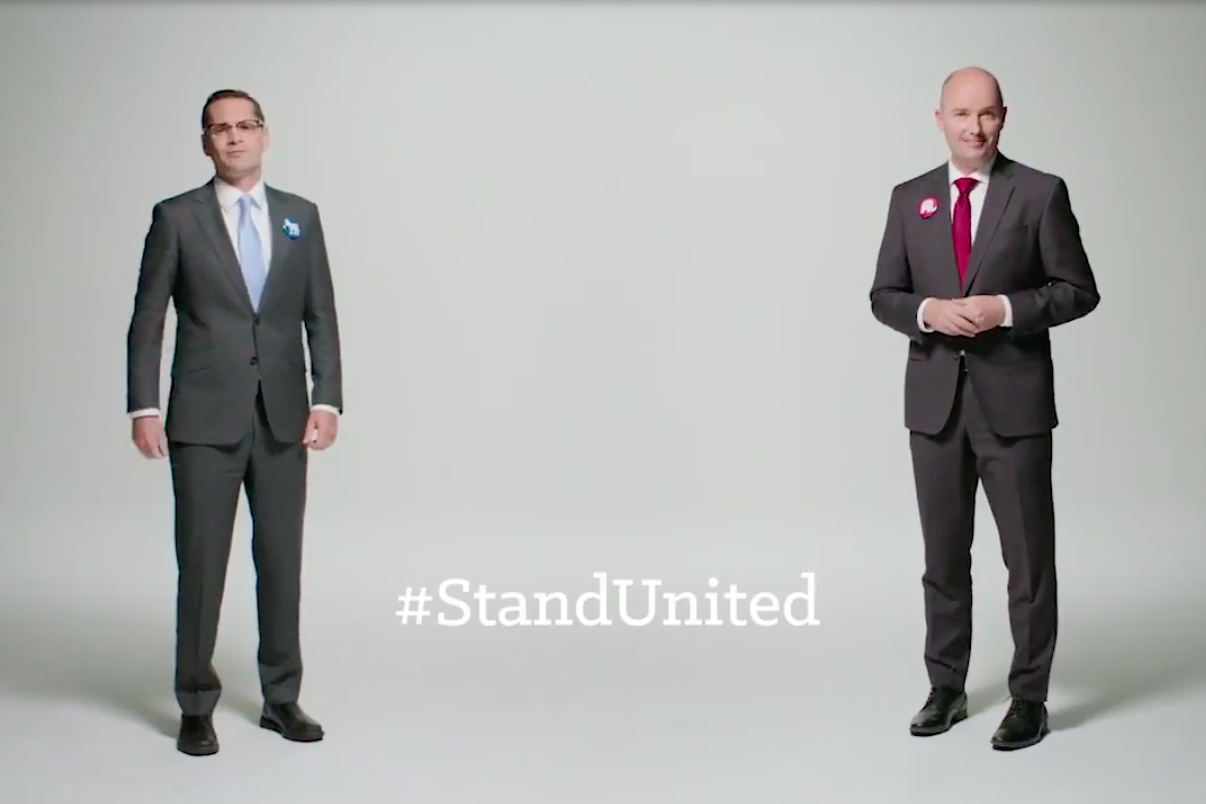 This week, Republican Spencer Cox and Democrat Chris Peterson, both running for Governor of Utah, appeared side by side in a series of ads calling for citizens to be respectful of the outcome of the upcoming election, no matter who wins at the polls. The two said that while their approaches to governing may differ, they shared a commitment to “American civility and a peaceful transition of power.”

“Win or lose in Utah, we work together,” Peterson says.

The ads were created out Salt Lake City-based Boncom, whose strapline is “Good work for good causes,” according to its site. The agency’s president is Andrew Bagley, whose last name might sound familiar; his brother, Jason, is former executive creative director at Wieden+Kennedy, Portland, where he led notable work for Nike, Old Spice, Kentucky Fried Chicken and more.

Andrew discussed with Ad Age the origin of the campaign—a hopeful story that serves as a reminder of what good governing is all about.

How did you come into this job? Who were the actual clients on this, and what was the brief?

Two weeks ago, Lt. Gov Spencer Cox called Steve Wright, Boncom’s client relations VP, with an idea. Cox was concerned about how the state and the nation would react to the outcome of the presidential election. Would it be peaceful or would it bring on more anger?

Cox told us he wanted to speak out and encourage people to support a peaceful election and transition of power and he asked if we would help because of our agency focus on behavior-change campaigns. Of course, we said yes.

As we discussed this, we both quickly realized that the best way to get this message to resonate would be for Cox to invite Chris Peterson, the Democratic gubernatorial candidate for Utah to join him in the delivery. Peterson quickly said yes.

Who was involved in creating the ads?

A couple of members from the Boncom creative team, Executive Creative Director Steve Driggs and Creative Director Garrett Martin, went to work writing the scripts from the talking points provided by the campaigns. Wright then put together a targeted, state-wide, two-week distribution plan, with air time fully donated by the local networks—NBC, CBS and ABC. The spot was pushed out on social media channels and has been picked up by national and international media outlets, like CNN, New York Times and the Today Show.

Where did the idea to put both candidates together come from?

It was very clear from our early conversations with Cox that, to set the right tone for this message, both candidates had to be involved. Seeing both of them deliver this message together is almost more important than the words they are saying.

Ultimately, what's the goal for this campaign? Cox is significantly ahead in the polls, so what is the campaign aiming to do?

We hope this message inspires and is copied by others. As Maria Shriver said when re-tweeting the video, “I wish every person in every race would do the exact same thing. We’d all benefit. Please share far and wide. Who’s up next?”

This isn’t about who wins an election. It’s about how we treat each other. The candidates wanted to show how it’s possible to disagree about how to address the issues, while still being respectful of others. If two politicians from different parties and perspectives can figure out a way to find common ground, then we each should be able to do that with our neighbors.

You'll notice from many of the media interviews they’ve done together since this video was released that Peterson and Cox disagree on many things. But they believe in finding ways to disagree that don't dehumanize. That’s the goal for this campaign.

Any interesting anecdotes from the shoot or the creation of the spot? Were there any tensions at all?

The two candidates didn’t actually know each other before running against each other for governor, and they support very different viewpoints. But during the shoot, instead of retreating to their separate corners, most often you could find Peterson and Cox talking with each other. They talked a lot about the impact more civility could have locally and nationally. They actually have several similar interests and beliefs outside of politics, which they talked about as well.

Also, since you and Jason are brothers—do you ever bounce ideas off each other? Do you ever get competitive?

Yes! Advertising is somewhat of a family business for us, it seems. It’s great to be able to talk about what we are facing at our different agencies and bounce ideas off of each other. I wouldn’t say it never gets competitive, but we do celebrate each other’s wins.

How the ad world continues to fail the Asian community