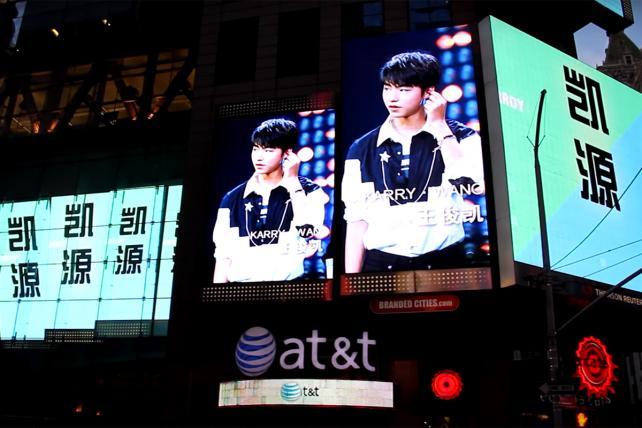 It's the newest take on the teenage tradition of hanging fan posters above your bed.
Credit: KarRoy凯源频道 TFBOYS王俊凯X王源 via YouTube

When Chinese boy band singer Karry Wang turned 17 a few months ago, fans congratulated him by buying ads. Lots of ads. They booked time on 11 giant screens in Times Square in New York. In China, they put his face on a helicopter and on a light rail train. They bought outdoor ads in Paris, Seoul, Beijing, Taipei and Reykjavik.

Altogether, fans probably spent over $15 million on Wang, the lead singer in Chinese boy band TFBoys, said Ruey Ku, a Publicis Media exec in Shanghai. And that was not an isolated case.

For Chinese fans, buying out-of-home ads has become a common way of showing devotion for their favorite stars -- a media-savvy, big-budget twist on the teenage tradition of taping posters over your bed. Chinese fans finance ad campaigns on crowdsourcing platforms, by selling T-shirts or making coffee-table books of photos shot by fans. Often, there's a charity element too. Fans have planted trees, donated to animal shelters and given music lessons to schoolchildren, choosing causes they hope will please the stars they love.

"I think the mentality for fans is, 'I love (my favorite stars), and my goal is to make sure more people know about them,'" said Ku, Publicis Media Content GM in greater China. "They're willing to spend money or a lot of time to help particular celebrities or groups build their influence."

Ku says Publicis Media hasn't arranged any such buys, though it's been tracking the trend of big fan love, especially for young male stars who are referred to in China as "young fresh meat." (A Publicis Media team working on a Chinese reality show with a big star once couldn't find hotels near the shoot because so many fans had booked rooms to be near him.)

For the crowdsourced ad campaigns, most fans can only afford small sums, but "very often, one or a couple of very wealthy fans will front a very big chunk of money," Ku said. "They're almost looking at their idol as an investment. They want to make sure he is bigger and can go even further and become even more massive and influential."

Fans are also thoughtful about their media spend. For the 17th birthday of teen idol Wang in September, fans put his picture on a rail line in Chongqing, the city of his birth. Fans bought ads in Iceland because Wang had expressed a desire to travel there, and fans wanted to make sure his reputation preceded him.

Times Square is one of the most popular locations for Chinese fan ads; there are a lot of Chinese ads there in general, including propaganda ads from China's government. Tourists inevitably are surprised to see ads there in their language and post pictures on Chinese social platforms, which gives them added resonance.

Branded Cities Network operates a suite of 11 screens at 3 Times Square in Manhattan, where campaigns paid for by Chinese fans have aired. The company says some of their requests have come through Chinese or South Korean agencies, though it couldn't name specific ones. "We think it's great," said Michael Galkin, director of marketing and research. "If you have a bunch of people pooling money together you can make an impact halfway across the world."

Earlier this month, an online fan club in China used the 11 Times Square screens to mark the 5th anniversary of quirky K-pop band called EXO, whose members are marketed as aliens with superpowers, like teleportation or healing.

Sally Yang, a 22-year-old college English major from the southeast city of Guangzhou, helped the fan club work on that campaign. The group functions through teams of volunteers, where everyone has a specific role; there are social media experts, translators, and people who raise funds by selling albums imported from South Korea. "What I do is support our idols, like sending them gifts when they have a birthday," she said. "I just want to make them happy."