Will 'Free the Bid' Put More Women Behind the Camera? | Ad Age
Skip to main content
Sign In Register

Will 'Free the Bid' Put More Women Behind the Camera?

Next month, the U.S. may (or may not) see women make a tremendous leap forward if Hillary Clinton becomes the first female president of the country. Meanwhile, there's another lady shaking things up when it comes to inequities in the ad industry.

About two weeks ago, director Alma Har'el rallied top agencies and marketers around an important cause: getting more female talent behind the camera on commercial shoots. With the help of agencies including Pereira & O'Dell and Mother, she introduced "Free The Bid," an initiative that called for agencies to include at least one female director every time it triple-bids a commercial production. The program also asks brands to encourage their agencies to include female directors in the bidding process and also urges production companies to add more women to their rosters.

Ahead of the initiative's official debut, Ms. Har'el had already garnered the support of brands including Coca-Cola, Nestle Waters and eBay, as well as top agencies and networks -- such as McCann, FCB, BBDO, Pereira & O'Dell, Mother, 180 L.A. and JWT -- and several production companies like B-Reel, Tool and m ss ng p eces. It's a tremendous commitment, one of those causes that companies might merely pay lip service to yet fail to act on down the line, but when Ad Age checked in, at least some of the players were already in the midst of doing the hard work to make good on their pledge.

"This is such a concrete example of where it's messed up that it's pretty easy to get everyone on board," said FCB CEO Carter Murray, among the first companies to sign up. "We've got all our clients, and all our agencies in North America are signed up and actively doing this."

McCann Worldgroup Global Creative Chairman Rob Reilly said the initiative is already in play at the agency's New York office. "This wasn't forced by me, but everyone got behind it and said it's the right thing to do," he said. "Sometimes bills and laws get written and redone and they come up with a new law that's even better, but someone has to write that first bill for change to happen. The big agencies need to be part of this effort, and the best thing that can happen is that there aren't enough viable female directors, and then it forces production companies to look at more female talent."

EBay CMO Suzy Deering was one of the first adopters of the program and said the company has already implemented the initiative into its current work, and "moving forward, will update our agency partners' scopes of work," she said. "The cycle must be broken. Given our diverse community of buyers and sellers around the world, this is an important cause for eBay to stand for." 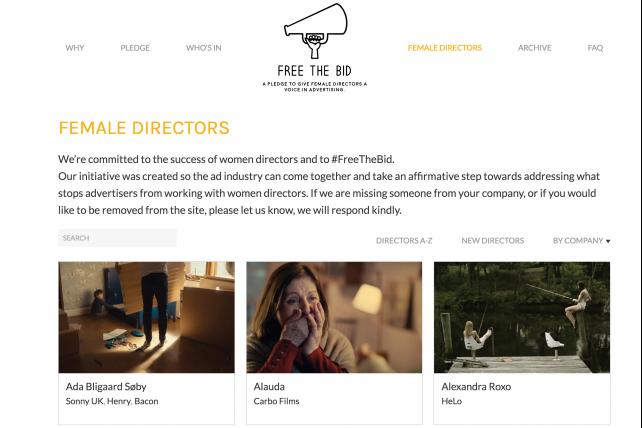 But putting the commitment into action hasn't been easy. "On the first day I asked my assistant to call around to production companies and reps to find all the female directors," said McCann Chief Production Officer Nathy Aviram. He's gone on to assemble a team to evaluate and categorize the reels, under the leadership of Executive Producer Kathy Love. "I wanted to make sure who did what, what their strengths were. They're going through about 150 or so reels, and by the beginning of next week they'll be getting together, going through categories and key words. It's a huge undertaking. It's crazy."

The Free the Bid website also serves as a showcase of female directors, featuring some 180 women and their biographies. For producers, it's just a starting point, however, as it's not yet comprehensive and features only one spot or film for each person, linking out to their full reels.

Pereira & O'Dell co-founder P.J. Pereira's own actions helped to inspire Free the Bid when he vowed independently to include a female director on triple bids after he saw Ms. Har'el quoted in an article about female commercial directors. Since then, "production companies started to react and send us more women than before, so it's not as complicated as we thought when it comes to finding female talent," he said.

But this isn't about giving female directors a free ride. "The whole purpose of this initiative is to give them a chance to pitch," he said.

"It makes a whole lot of sense," explained McCann's Mr. Aviram. "When you don't see it on the reel, you move on, but if women don't even get that opportunity, that makes it harder. I grew up in a Skittles world, when no women would even be considered for that sophomoric sort of humor, but that doesn't mean that women can't do that work."

Meanwhile, Free the Bid continues to draw more support. Just prior to press time, HP had signed on to the cause, as it dovetails with its own initiatives to promote diversity not just in-house, but with the agencies it works with. Last month, Ad Age reported that its CMO Antonio Lucio called on its five agencies to "radically improve" diversity in its leadership to include more women and people of color, going so far as to require agencies to deliver formal diversification plans within 30 days. This was following its own internal initiatives that, among other things, have led to women now holding 50% of the top marketing positions in the company.

HP signed on to take the Free the Bid pledge around the world, issuing this statement: "We believe the creative process of our ad agencies will be strengthened and we're excited to implement this pledge globally and give women a voice in advertising to the benefit of everyone, everywhere. We hope to inspire more brands to join us in this pledge and #FREETHEBID."

At agencies too, signing on to Free the Bid has helped to formalize internal efforts that have already been at play. "It resonated with us because it's what we've always done," explained Digitas CCO Ronald Ng. "We've always worked with women and in the last few months worked with at least half a dozen female directors on spots for clients ranging from Whirlpool to eBay. "It's one of those things you see and hit yourself on the forehead -- this should have been done many years ago."

Other agencies continue to jump in. Muhtayzik Hoffer is one very recent addition. "We've officially taken the pledge, and it feels really good," said Head of Production/Partner Michelle Spear Nicholson. "The cause has zero downsides. I'm proud to say this isn't something I have to sell through in my agency. That said, I just spent an hour on their site watching reels and realizing I haven't seen half of these amazing women. The problem is real."

In only two weeks, the initiative has seen progress. Free the Bid started with 20 agency pledges. Today, it has more than 50. Five production companies were initially on board, now there are 90, and Ms. Har'el said that at least 10 to 15 directors were signed to companies as a result of Free the Bid. The site also originally featured 126 directors; now it has 180, with a long waiting list of updates. 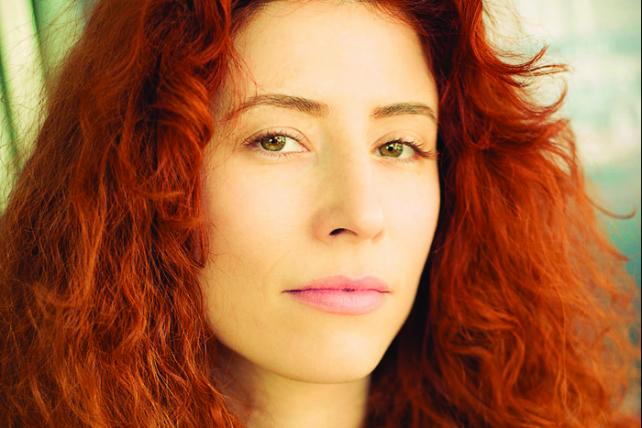 But not everyone has bought in. "There are a few agencies I appreciate very creatively who haven't joined," said Ms. Har'el. "They say, 'We can't make this because we can't commit on every bid that there's going to be a woman, because we don't know that our creatives are going to like certain directors and we also don't want to put women in the situation of being a token women.'"

"But I've been in that situation as a director. I know the only reason the brand is hiring me is because the subject matter is going along with empowerment advertising, where they feel like they have to get a woman on a script. But I think you have to take that token and run with it -- at least have the opportunity to fail. That's something women don't even get. So take that token and run with it and do the best job you can and show a new perspective. I think that would always open the door to more connections and for more women."

And this isn't just about the good of society, agencies believe. It's good for the work, too. "When it's all 40-year-old white dudes writing and directing the ads, there's probably a lot of sameness happening -- and I'm saying this as a white dude in his 40s," said McCann's Mr. Reilly.

Ms. Har'el added that if women aren't always going to make the cut, there are other options. If you can't find a woman, diversify your bid any way you can, she said. "There are so many other people who need to get in there, racially, there are so many choices you can make. We originally intended to call this 'Her Bid,' but we decided to call it 'Free the Bid' to send a message about diversity that the ad world needs to commit to."