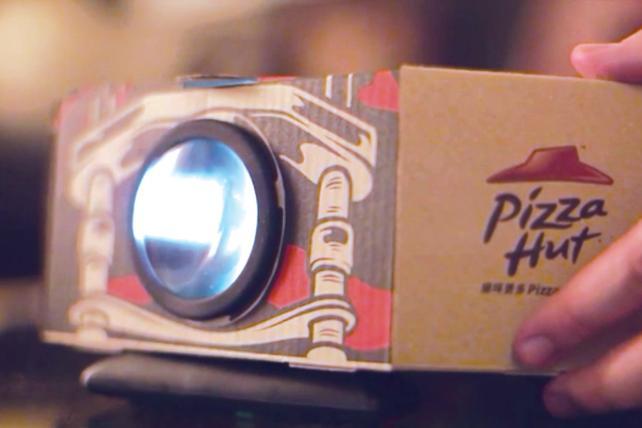 Movie night is becoming even more effortless, thanks to the Blockbuster Box from Pizza Hut and Ogilvy & Mather Group Hong Kong.

The innovative packaging idea brings together a timeless combination -- pizza and movies -- in a whole new way: by turning a typical pie box into a film projector.

The campaign debuted in Hong Kong on April 17 and features a pizza container with a special lens housed in the "pizza saver" disc that sits in the middle of the pie. Pie eaters place the lens on the side of the box and are then able to project short films through their mobile phone via a special app.

The project generated buzz from gadget enthusiasts, marketers and, of course, pizza lovers. After the success of an April pilot in Hong Kong, Pizza Hut tested the Blockbuster Box in two additional Asian markets.

Reed Collins, chief creative officer for Ogilvy & Mather Hong Kong, said the client brief for the promotion was simple: Bring innovation to life in a way that would catch consumers' attention and get them talking.

One way to do that was through packaging. Aside from the added movie projector function, the agency worked with illustrators to create designs that reflected various genres -- action, romance, sci-fi and horror.

At the same time, the team needed to make the box as simple as possible to avoid adding to the production cost. They streamlined the design by assigning parts multiple uses. For instance, the pizza saver not only housed the projector lens, it also served as a stand for a phone.

Another big challenge was designing the lens holder so that it snugly fit into the front of the box. After six prototypes, a solution emerged: a version that used raised "fins" that dug into the cardboard. 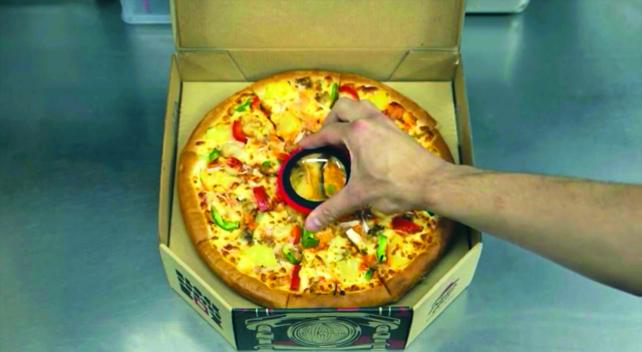 The pizza saver housed the lens and served as a phone stand.

While the box is designed to work with an app, pizza eaters can also use it to project other content from their phones: Consumers just have to lock their screen settings so video plays upside down, because the projector lens flips the content projected through it.