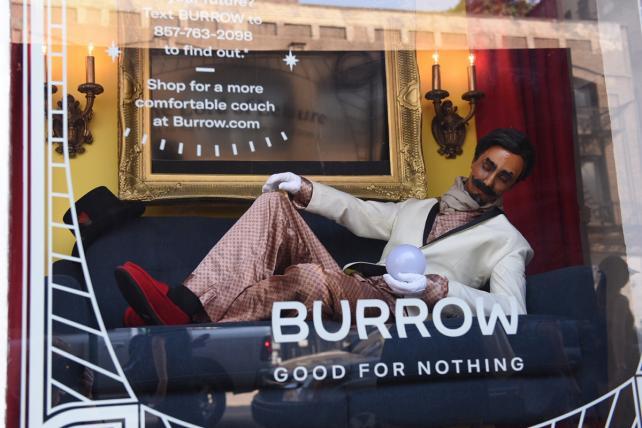 Rising rents for brick-and-mortar locations and competition from online retailers have left many storefronts in New York City unoccupied for months at a time. One digital startup is looking to take advantage of that real estate for advertising.

Burrow – think Casper for couches – will advertise in five storefronts in New York City this month, promoting its modular sofas that are supposedly easy to assemble and are delivered in compact boxes to cut down on shipping time and costs.

"We noticed, especially in New York right now, there are some many storefronts, prime real estate, not being used for anything," says Burrow co-founder Stephen Kuhl.

Burrow, which worked with branding firm Red Antler on the concept, has set up an animatronic fortune teller, so-called the Lord of Leisure, in these store windows. The Zoltar-like figure sits reclined on a Burrow sofa and tells passersby their fortune through text messaging. The fortune teller will respond to the text with a fortune tied to leisure and relaxation, a core message of Burrow. Those who participate are eligible to win a free Burrow couch.

The idea is to get people who are rushing by and on their phones to pause and remember to "take some time to chill," says Emily Heyward, co-founder of Red Antler, whose clients also include Casper.

Vacant storefronts in New York City have been used in recent years for digital advertising, but Heyward says "video is not enough to get people to notice something is going on."

"Similar to subway [advertising], there's a chance for more intimate communication," she says. Subway advertising has become a popular advertising vehicle for digital startups like Casper.

Utilizing vacant storefronts for advertising is "a growing trend based on necessity," says Lee Peterson, exec VP of brand strategy and design at retail consultancy WD Partners. As more people shop online and foot traffic to physical stores declines, Peterson says stores are closing at a rate of 8 percent to 12 percent year-over-year for the last decade.

"From my conversations with developers, out of necessity they are starting to think of other opportunities for these spaces," he says. "One of the ways is advertising in some way, shape or form."

Regardless of the need, it wasn't necessarily easy securing the locations in New York City. "Landlords are not super interested in doing this," Kuhl says.

Burrow's activations will be located at 120 Christopher Street, 319 Bowery Street, 248 Mott Street, 307 Avenue of the Americas and 168 Bowery Street.

The activation will be on display through August, but Kuhl says they will be looking to move it around the city.

~ ~ ~
CORRECTION: An earlier version of this article said Burrow's interactive activations will direct visitors to a forthcoming pop-up store for the brand. After publication, a spokeswoman said the storefronts will not promote it.