The New York Times helped to topple the priapic pillars that have undermined women and others in tech, media and most prominently, entertainment with its groundbreaking reporting in 2017. Fueled by that momentum, the brand is making yet another appearance on a big Hollywood stage with a Golden Globes ad addressing how women's voices are coming to the fore. It's the latest iteration of the paper's "The Truth Is Hard" campaign, created out of Droga5 New York, which broke during the Academy Awards last year.

Marking the brand's first appearance on the Oscars, the campaign sought to capitalize on the flurry of conversation around truth and facts in the news to assert the quality of The New York Times' original reporting. That reporting--including its high-profile coverage of Harvey Weinstein from Jodi Kantor and Megan Twohey--has gone on to set the stage for the latest ad, sure to resonate powerfully as it plays on the first big night of Hollywood's awards season.

Like its predecessor, the new spot is spare, featuring basic black type against a white background. It opens with the back-and-forth exchange of "He said" and "She said" then climaxes when "She saids" rapidly fill the screen. The campaign's staple "Truth" lines then appear, asserting "The Truth has power. The truth will not be threatened. The truth has a voice."

"We thought that using language that has been used to silence women in the past and turning it on its head was a simple way to show the clear distinction between the way the world was merely a year ago and the way it is now," says Droga5 Associate Creative Director Julie Matheny.

The Times had its marketing strategy ironed out since the campaign's debut last year, but "I wouldn't have said we had plans for the Golden Globes a month and a half ago," says Senior VP, Head of Brand David Rubin. The brand seized on the opportunity afforded by its latest headlines. "We've done a lot of groundbreaking reporting that's had an outsize impact. What identifies a lot of our investigative reporting is that we hold truth to power, and we do so without fear or favor. We know that's a spark to help people want to subscribe."

Rubin says the Times is targeting current events-interested subscribers, with a focus on those in their 30s and 40s who care about news but haven't yet added it to the pool of music or unbundled entertainment that they're willing to pay for. "We think they understand the need to support this stuff, but news isn't top of mind," he says.

As for any risks involved, Rubin says the Times wanted to be sure its message rang clear in the midst of all the conversation: "If you're supporting the Times, you're helping the stories to happen. That's what we want the advertising to be about. It's not meant to be an ad about a cultural topic, it's about the role our journalism has played in it."

The Times itself hasn't been free of scandal. In November, the company suspended Glenn Thrush, one of its prominent White House reporters, following accusations of sexual misconduct. The following month, however, the paper announced that although it didn't condone his behavior, Thrush would remain on staff, albeit on a new beat. 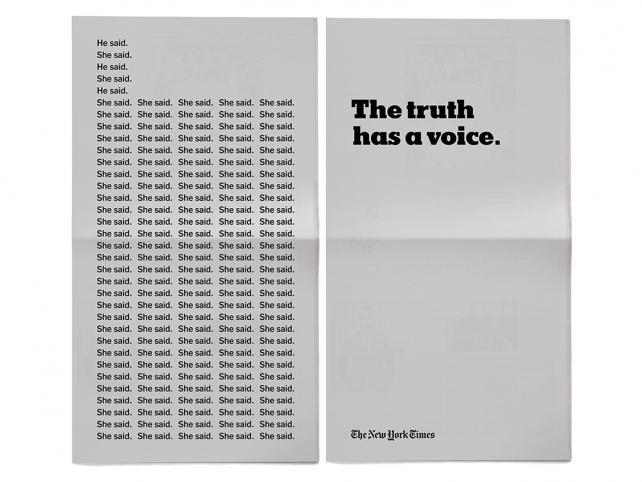 The campaign will also include print as well as digital assets that will focus on actual Times stories. "The TV highlights the larger impact the journalism has had, but we want to be a little more specific to try and connect all the dots," says Rubin. "It's important we do both." Going forward, new ads will address other major news topics of the moment, he says.