The Surge of Consultancies, and Nine Other Agency Facts You Need to Know | Ad Age
Skip to main content

The Surge of Consultancies, and Nine Other Agency Facts You Need to Know
By Bradley Johnson
1

U.S. agency revenue rose 4.4% to $48.3 billion in 2016, according to Ad Age Datacenter's bottoms-up analysis of more than 700 agencies, networks and companies for Agency Report 2017. Revenue broke a record, but growth was the slowest since 2013.

Going digital
Digital's share of revenue for U.S. agencies from all disciplines reached 46.6% in 2016. Digital accounted for one-fourth of revenue in 2009.
Source: Ad Age Agency Reports. Percentages as reported in historic Agency Reports. Increasing percentages partly reflect that Agency Report over time has expanded to include more digital-focused firms, such as major digital-centric consultancies. On a pro forma basis, 46.6% in 2016 was up from 45.0% in 2015.
Agency Report 2017
AdAge.com/agencyreport2017
Datacenter subscribers get:
Datacenter subscription info:
3

Four consultancies rank among the world's biggest agency companies: Accenture Interactive (No. 6), PwC Digital Services (7), IBM iX (8) and Deloitte Digital (9). Combined revenue: $13.2 billion. IBM was first of the four to make the list, in 2008—and the first to crack the top 10, in 2014.

Of the world's five largest digital agency networks, only one is owned by an old-guard company: No. 4 Publicis.Sapient (including SapientRazorfish and DigitasLBi). Accenture, IBM and Deloitte top the list. PwC is No. 5. 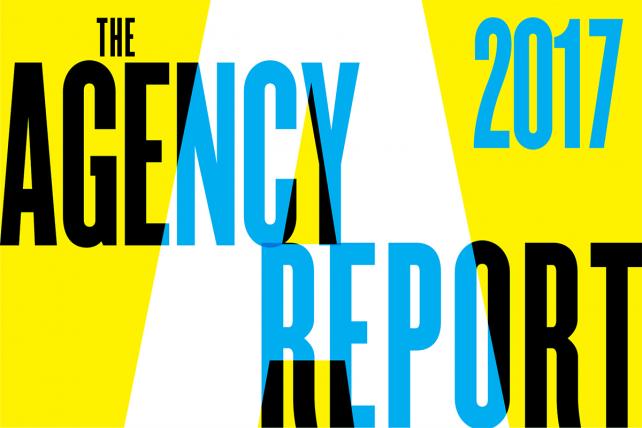 Related Stories
Agency Revenue Up But Growth Rates Are Slowing
Creeping on Agencies' Turf, Consultancies Are Shaking Up the Marketing Industry
7

Growth by agency discipline
2016 estimated U.S. revenue growth by discipline, and digital revenue growth from all disciplines, for the nearly 700 agencies in Agency Report. Healthcare was the fastest-growing discipline.
Source: Ad Age's Agency Report 2017. See expanded rankings by discipline. Revenue and percent change based on data collected and/or adjusted in 2017. 1. All agencies in Agency Report. 2. Digital work for all networks and agencies in report, including ad, customer relationship management/direct marketing, digital, experiential/event marketing, healthcare, media, multicultural, promotion and public relations agencies. 3. Disciplines may overlap. For example, a healthcare agency may generate a portion of its revenue from CRM/direct marketing, or a PR agency may generate a portion or all of its revenue from healthcare marketing. 4. Including experiential/event marketing. 5. Non-digital work at media agencies.
9

Agency stocks have fared well. IPG in April hit its highest price since 2002; WPP in March scored a new high; and Omnicom in December reached its highest-ever adjusted close.