READ THIS NEXT
R/GA's Jess Greenwood is leaving for Apple

This year, the five best ideas in the U.S. Hispanic market were all driven by a sense of responsibility, from Sprint's anti-distracted driving emoji installation to environmentally friendly beer packaging to an anti-bullying campaign. 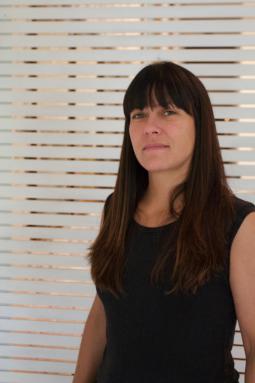 "They're all pieces with a purpose," said Fernanda "Fefa" Romano, jury president of the U.S.H. Idea Awards for the U.S. Hispanic market, and founder, creative and strategy partner of Malagueta. "I think that's a shift we're seeing all around the world."

The winners of the U.S.H. Idea Awards, organized by creative group Circulo Creativo and celebrated at an awards show Wednesday night in Miami, include the top five ideas selected from all the entries:

"When we talk about innovation, everyone thinks about 0s and 1s in technology. This is technology you can touch that's doing good for the world," she said.

And at a time when everyone is looking for new and original ways to talk about brands, this sustainability effort using biodegradable packaging gives a small brewer in the crowded craft category something for people to talk about, she said.

Unlike many sustainability or other innovative projects that become award show darlings and then are never heard of again, We Believers is scaling up production. Agency co-founder Gustavo Lauria said production is up to one million edible six-pack rings a month, allowing We Believers to supply other craft brewers in addition to client Saltwater Brewery, and to begin talking to big brewers about switching from plastic. We Believers and a small group of engineers who worked on the technology own the patent, and are producing the edible six-pack rings in California. 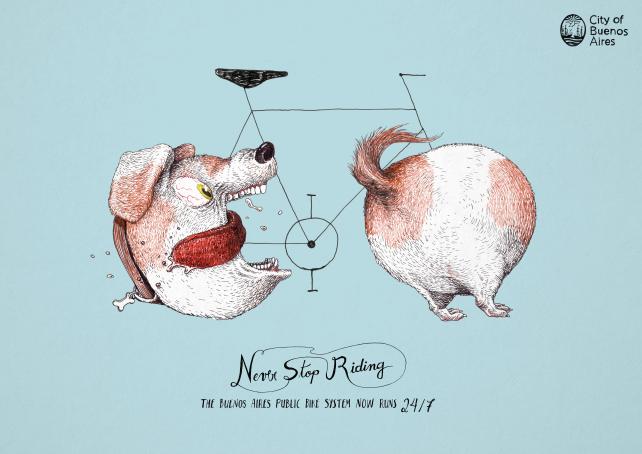 2. To let Argentines know that the City of Buenos Aires Public Bike System had started to operate 24/7, the fun, illustrated print and outdoor campaign "Never Stop Riding" highlighted that non-stop feature by turning the wheels of a bike into natural partners in a chase: a baby and a breast, a dog and its tail, and a squirrel and a nut.

"When you have limited media and want to catch people's attention, you need the perfect combination of images and the right messaging," Ms. Romano said.

The campaign ran in Buenos Aires rather than in the U.S. but was entered in the Beyond Hispanic category, open to work done in the U.S. by Hispanic creatives but run elsewhere (in this case, a pair of Brazilians, Fernando Reis and Marcelo Padoca, at Miami-based The Community).

The work also won a Grand Prix at Cannes last year, and the next iteration, the whimsical "Don't Act Like a Pedestrian When You're on Wheels" -- a warning about safer cycling -- won two silver Lions this year. The creative team is already working on a third, and even bigger, version of the city bike effort.

3. Florida has an alarming number of car accidents caused by texting while driving, so for Distracted Driver Awareness month in April, Omnicom-owned Alma and Sprint came up with "The Last Emoji" and commissioned a sculptor to create an emoji from a crashed car, next to a sign that said "Don't txt and drive." The nine-foot high, 900 lb. sculpture, featuring an eye made from a destroyed tire and a bright red car seat as the tongue, spent two months on Miami's heavily-trafficked Brickell Avenue, and now resides at the Miami Ad School.

"If you want to communicate to young people in their own language that they shouldn't drive and text, it's an emoji," Ms. Romano said. "It was very on target, very good execution, and garnered a ton of media attention."

And this isn't the end of the road for "The Last Emoji." Luis Miguel Messianu, Alma's creative chairman and CEO, said the plan is to take the statue to other cities next year, and to commission additional pieces.

4. In Omnicom-backed LatinWorks' "Jack" spot, for the non-profit Music Has No Enemies, nonagenarian war veteran Jack Tueller recounted the story of a German sniper who was taking out his unit in Europe during World War II. So Mr. Tueller played a German pop song for the young soldier, who stopped firing and eventually surrendered -- because "music is life."

"It delivers the idea that music can stop an argument or a bad conversation," Ms. Romano said. Due to the skilled storytelling, "I didn't know until the end what the outcome was."

5. In the video "Devices" for United Communities of San Antonio, phones and laptops swirl around, slamming into young people with increasing brutality. The message: "Cyberbullying hurts. Help us defeat it." The ad was entered by the production company, Shooters Films, because the agency, San Antonio, TX-based Bromley, closed a year ago.

The most-awarded agency was Alma, part of the DDB network, followed by The Community and We Believers.