Volkswagen Group has launched a global creative agency review for its namesake brand as executives at the German auto giant look to centralize marketing control and improve VW's image in wake of the 2015 emissions scandal. 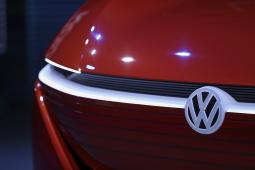 A logo sits on the bonnet of I.D. Vizzion electric vehicle, manufactured by Volkswagen AG, ahead of the 88th Geneva International Motor Show in Geneva, Switzerland, on Monday, March 5, 2018.
Credit:
Chris Ratcliffe/Bloomberg

The review, which is expected to be held at the holding company level, could threaten Interpublic Group's hold on the brand in the U.S., where Deutsch Los Angeles has held the account since 2009. IPG will likely be battling with Omnicom, whose DDB is the longtime VW agency in major portions of Europe. Omnicom's BBDO also has VW in some global markets, including Brazil.

Global VW Chief Marketing Officer Jochen Sengpiehl outlined his vision for a more centralized agency model organized around regional hubs at a press briefing today in Berlin, according to the German magazine Horizont.

VW spokespeople in the U.S. and Germany did not immediately provide comment to Ad Age. But people familiar with the process told Ad Age that the review would likely be held at the holding company level and include the U.S.

Sengpiehl wants to consolidate the account into big regional hubs covering Europe, China, North America, South America and the rest of the world, Horizont reported. VW's global media business, which has been handled globally by Omnicom's PHD since 2016, is not expected to be part of the review, according to people familiar with the matter.

But Sengpiehl is eyeing big changes in how VW spends its marketing dollars, in hopes of gaining efficiencies. "We've spent far too much money on paid media in the past, and we want to change that," he said, according to Horizont.

Volkswagen Group, whose brands include VW, Audi, Skoda and Porsche, is the world's sixth-largest advertiser spending $6.74 billion in 2016, the latest figures available from the Ad Age Datacenter. The VW brand is a smaller player in the U.S. than it is in some other global markets, but the brand still shelled out $421.6 million in measured media in 2016.

DDB's relationship with VW goes back decades. In the U.S., DDB predecessor agency Doyle Dane Bernbach took on the account in 1959 and the New York office was behind award-winning work whose witty and self-depreciating style helped turn the Beetle into the best-selling imported car in America by the 1960s. But by the mid-1990s VW began turning to other agencies in the U.S. DDB tried to win VW back in the U.S. in 2009, but Deutsch emerged victorious.

Omnicom is expected to make an aggressive run at the U.S. business again as part of the new review. And anything is possible this time as Volkswagen Group operates under new leadership globally and in the U.S. Late last year, Volkswagen of America tapped Jim Zabel as its new senior VP of marketing overseeing the VW brand. Zabel, who came from Omni Advertising in Los Angeles, replaced Vinay Shahani, who departed for Toyota after overseeing multiple Deutsch-led campaigns.

Sengpiehl has been overseeing the VW brand's global marketing since May of 2017, after serving as Hyundai Europe's marketing boss since 2014. It marked a return for Sengpiehl, who had previously held the VW marketing post from 2006-2009.

Volkswagen Group also has a new leader at the top. Herbert Diess, who had been overseeing the VW brand, was named CEO for Volkswagen Group last week, replacing Matthias Mueller. Diess has made North America a priority, where Volkswagen hasn't posted a profit in the last 15 years, Automotive News reported.

The VW brand's image took a beating in the wake of the 2015 emissions testing cheating scandal. But U.S. sales have been on the uptick recently. VW brand sales are up 10 percent through March, led by two new crossovers, Automotive News reported.