This agency faked out Cubs fans with 'parking tickets' 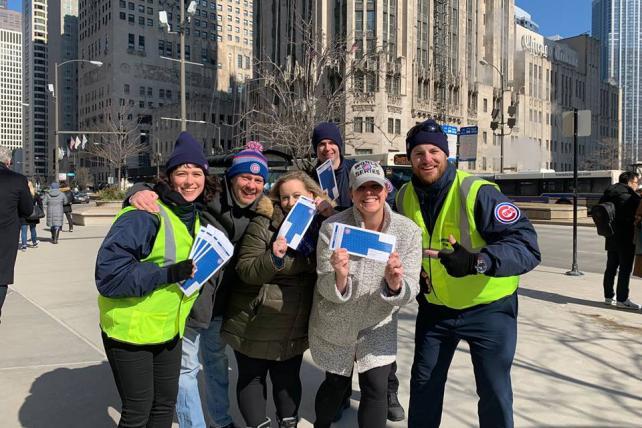 Who needs a Sazerac?

The Ad Age Small Agency Awards are back, and they're taking us down to New Orleans this summer for a conference that's sure to bring big-name speakers, great music and a healthy amount of frozen cocktails. Submissions are now open — let us know what makes you small but mighty.

Read on for this week's agency news, and see you next week!

If you've ever driven in Chicago, you're probably familiar with the draconian parking regulations. Chicago shop Schafer Condon Carter made light of that unfortunate phenomenon with an activation for the Chicago Cubs. The "In-Forcement" team went out on the streets to find fans wearing Cubs gear, who were charged with "blatant display of Cubs fandom" and given free tickets for the upcoming season. It's part of the Cubs' "Everybody In" campaign.

Advertising Week — which already operates in New York, Sydney, Tokyo, London and Mexico City — will launch later this year in Africa. The new edition will take place in Johannesburg, South Africa in late October. "From female entrepreneurs in Kenya to start ups in Ghana to a broad spectrum of digital innovation out of Nigeria, there is a unique opportunity to unite the continent and leverage our platform to tell incredible stories from all corners of Africa," Advertising Week CEO Matt Scheckner said in a statement.

The Clio Awards have announced its chairs for 2019. Get ready for a big, juicy block of text here…

The Clio Awards will be honor its winners on September 25 in New York City.

An antidote to ageism?

It's no secret advertising has an ageism problem (my colleague Adrianne Pasquarelli explored the topic in a feature late last year). Companies like a new one called Graystar Works might help. Greta Thomsen, CEO and founder, said in an email the company is trying to make the search easier for job candidates over 40. "My team and I have experienced ageism first hand, and it's a hard pill to swallow – especially when you're told you're overqualified," she wrote. Interested candidates and employers can sign up on the company's website.

After a pitch, San Francisco independent shop Odysseus Arms was tapped to help millennial-focused insurance brand Toggle expand to more states. R&R Partners will handle media for the launch campaign from the brand, which is backed by Farmers Insurance.

Havas Media has been named media agency partner to Quincy, Massachusetts-based Stop & Shop, which operates more than 400 grocery stores in the Northeast.

Mcgarrybowen has named Ida Rezvani as president of its New York office. Rezvani was formerly a global client leader at WPP, leading IHG.

Zimmerman Advertising has appointed Jeff Pearson as its chief client officer. Most recently, Pearson was an senior VP of e-commerce and marketing at Lids Sports Group.

WPP's brand experience and activation agency Geometry has named Beth Ann Kaminkow as its new global CEO. Kaminkow is currently CEO of Kantar Consulting Americas. Current global CEO Steve Harding has "decided to move on from the business after six years" as its global CEO, Geometry said in a statement.