Agency Brief: More stupid stunts and getting hammered at lunch

I have an idea for any of you looking to get fired next week.

Wine Week. It's a little thing where you pay $20 for 10 wines at lunch at restaurants including Smith & Wollensky, Quality Meats and more. Walrus has released an out-of-home campaign for restaurant group Quality Branded to promote Wine Week at its eateries (er, drinkeries?) and it'll hit close to home for anyone who enjoys a tipple or 10 at lunch. 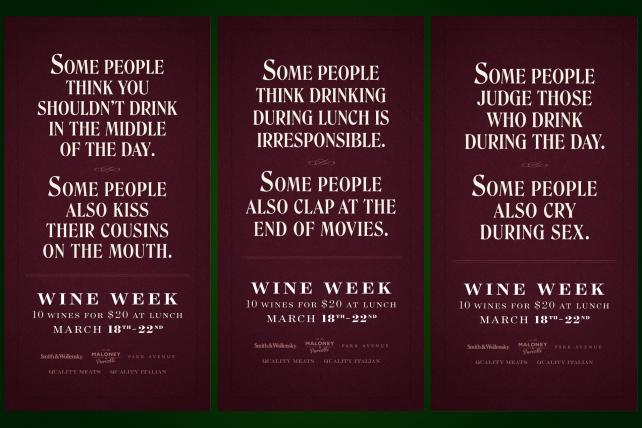 "When you've got a program that encourages people to consume 10 wine samples at lunch, you run the risk of some (boring) people looking down their nose at it," says Deacon Webster, Walrus co-founder and chief creative officer said in an email. "Instead of running from this reality, we decided to double down. We are bracing ourselves for the response."

What are you waiting for?

Before you go off on Wine Week, don't forget to apply for Ad Age's Small Agency Awards, which will be held this year in New Orleans as part of our 10th annual Small Agency Conference July 30-31. The application site can be found here.

Not another face tattoo

The above subhead is actually how Pete Pirone, who says he's another job-seeking fellow, titled his email to me. If you read last week's brief, you may have seen the video from Rudolph Troncone, who made a video of himself getting R/GAs logo tattooed on his forehead.

Pirone has a bit of a different tactic. "I, like him, am still looking for a job. It seems like all you hear about today are juniors performing elaborate, cringe-worthy stunts to get an agency's attention. About 0.0075% actually work and garner a headline," he wrote to me. "So I had a little fun and created an agency stunt generator for creative directors. The overall idea is that CDs can go ahead and pick a ridiculous stunt to be performed...or they can just go to my portfolio and check out my work. Because it's the work that really matters, right? ... Right?"

Check out Pirone's site here. And please, for the love of God, do not send a fake foot to any agency to show how much you want to "get your foot in the door."

New Orleans-based agency Peter Mayer Advertising has won project work for Tennessee-based sausage company, Williams Sausage. The agency will, ahem, link up with Williams Sausage as it seeks to rise from a regional favorite to a national staple. Hey, not the wurst idea.

Are they crying from happiness or is that just a giant onion ring? UM has won media for TGI Friday's, taking on planning, buying, search and social duties for the casual food chain.

Formica Corp. has named Curiosity Advertising, Cincinnati, creative agency of record for North America. Netherlands-based Broadview Industries announced late last year it would acquire Formica, the world's leading manufacturer of high-pressure laminate (for, you know, countertops.) Amy Gath, VP of marketing for Formica in a statement cited "Curiosity's experience working with iconic brands and their exceptional creativity." Empower, also based in Cincinnati, previously handled Formica. Jeff Warman, chief creative officer of Curiosity, had previously worked on the brand while in a similar role at Empower before making the crosstown move last year.

Dick Van Motman has been appointed as Global CEO of creative for Dentsu Aegis Network, while Gordon Bowen steps into the new role of chief creative officer. Bowen will also continue to be Chairman of McGarryBowen.