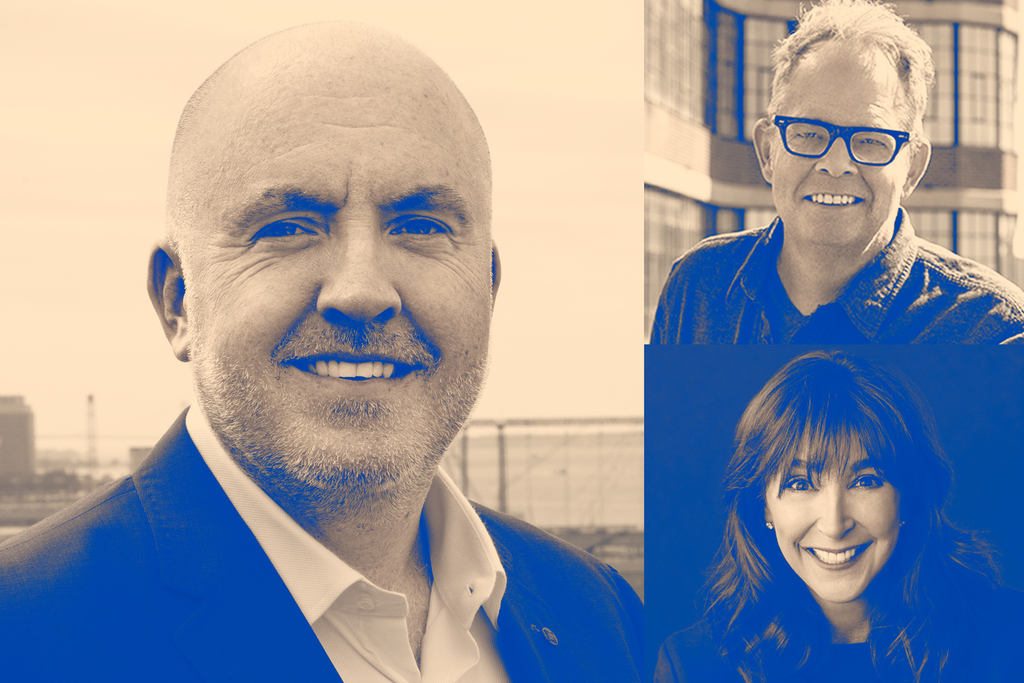 Major shifts are being made to streamline global Dentsu Aegis Network agency, McGarryBowen. Effective immediately, the network's global offices will all operate under a single unified umbrella led by Founder and Global Chairman Gordon Bowen, who is also the global chief creative officer of Dentsu.

"With growth and momentum fueling us, the time has come to unify around an integrated global offering and a single leadership structure," Bowen says. "Toward that end, we are installing our most trusted and respected leaders."

Ned Crowley will now be moving from U.S. to global chief creative officer, with all regional and international chief creatives like Matt Ian of New York, Mike Wente of San Francisco and Jeffry Gamble of China reporting into him.

Jon Dupuis, who was the global managing director of McGarryBowen, will become the agency's first global president. The agency says while Dupuis will be overseeing all U.S. and international offices in this role, he will also continue leading the American Express business globally, as he's done for the last 10 years.

Jennifer Zimmerman, who has been chief strategy officer in the U.S. of the agency since 2003, is adding on global responsibilities to her position. Part of her expanded role will be to ensure the agency is going to market with a consistent strategy and story, "inside and outside" of the network, McGarryBowen says.

The changes follow the agency's former U.S. President Pat Lafferty exiting in June, and also amid the agency's efforts to better serve its global clients such as United Airlines and AmEx.

Mark Penn hints at streamlining plans for MDC Partners
Following the release of MDC Partners' poor third quarter earnings report this week, Chairman and CEO Mark Penn confirmed on a call with analysts that the company is planning a streamlining effort that will result in the formation of two "multi-agency" networks, MediaPost reported. MDC's stock fell as much as 12 percent on Tuesday after the company reported a decline of 8.8 percent in revenue to $342.9 million and an organic revenue decrease of 7.5 percent in the third quarter. The company also revised its organic revenue expectations for the full year and is now anticipating a decline of 3 percent to 5 percent. Penn's private equity firm Stagwell Group invested $100 million in struggling MDC in March and has been working on a turnaround to cut costs and fuel collaboration among its various agencies including 72andSunny, Doner, Forsman & Bodenfors, Anomaly, CPB and Assembly. This week's earnings indicate that Penn still has a ways to go in returning MDC to growth.

Jay Pattisall, Forrester principal analyst, says Penn needs to strategize on how Stagwell and MDC agencies can work together to "remain competitive." He says there are several options Penn could take in streamlining the business including restructuring all digital and performance capabilities under Stagwell and all creative and media responsibilities under MDC. He praises IPG and Publicis Groupe's structures that allow agencies to work together effectively, saying no one shop "can do everything." Pattisall notes that Penn has started doing this, with at least MDC's Doner and Stagwell's Code and Theory both working on the Johnson & Johnson business.

Pattisall adds that a consolidation of brands might "make sense," even though that would certainly result in "seismic reverberations inside of the company" that houses MDC agencies that are accustomed to operating independently from one another.

S4 Capital comes out strong again in third quarter
To add insult to injury, another media mogul's holding company reported third-quarter earnings this week, and the results were much stronger than MDC's. Martin Sorrell's S4 Capital says its revenue spiked nearly 54 percent to 56.6 million pounds ($72.4 million) in the three months ended Sept. 30, while its gross profit rose 50 percent in the period. Year to date, S4 reports that both its revenue and gross profit are up more than 46 percent. The company says that is in line with its goal to double its organic growth by 2021.

Google commits to being more inclusive in its advertising
Ad Age's Jessica Wohl reports from The 3 Percent Conference in Chicago that Google is working on achieving three goals toward making its advertising more inclusive in 2020: reach parity in the representation of women, attain proportional representation of Latinx and eliminate stereotypes of Black and Latinx users, according to conference speaker Mackenzie Thomas, the diversity, equity and inclusion lead for consumer apps at the tech giant. Thomas says at 3 Percent that this commitment comes after Google found that the company often included diverse actors in its ads but cast them in stereotypical roles. She says she used to watch the 5 a.m. and 6 a.m. replays of Sportscenter in the mornings before school—to be clear those are the same episode—back to back, so she could learn sports stats to have something to talk about to her male classmates so they'd stop bullying her. And watching Callie and Arizona on "Grey's Anatomy" helped her see herself in entertainment, Thomas adds.

Feel-good content for upcoming holiday cheer
Gripe about retailers celebrating the holidays too early all you want but this spot, which began running on Monday, is sure to give you the feels. In its latest iteration of its national "Christmas Is What You Make It" campaign from agency The Richards Group, Hobby Lobby implores people to give the gifts that really matter: Their time, talents and love. In this spot, viewers are introduced to a mother who is too busy working as a nurse and taking care of her teenage son to decorate for the holidays. In a tear-jerker move, her son realizes this and sells his gaming console to pay for a Christmas tree and ornaments. When his mother comes home, she finds a decorated house, an immaculately-dressed kid and a gift for her under the tree: Clean laundry and dishes.

Oh the wonder of pups
People are total pushovers when it comes to their fur buddies. We pamper and baby the hell out of our dogs. Some people nowadays go as far as to spend hundreds on pet insurance every year to make sure Scruffy is in tiptop shape. Dogs may be the smartest creatures on the planet in how they've figured out how to manipulate us with their adorable faces so they don't have to fend for themselves at all. But really, how can we resist those adorable mugs? This new ad for Embark Veterinary from creative agency Mechanica spotlights the truly crazy "Things We Do For Dogs," like allowing our dogs to take over our beds or standing out in the rain at 5 a.m. with an umbrella over our pup's head (not our own) when it's time for a potty break. The point of the ad is not to show how insane we all are but to entice passionate pet owners to give their dogs the gift of the Embark DNA test this holiday season. Embark Veterinary says the test is critical in ending preventable canine diseases for all dogs. The ad—with its tagline of "A DNA test for your dog. A promise for all dogkind."—is running on connected TV, online and social media.

Wins of the week
Little Caesars sent its $176.6 million creative account (per Ad Age Datacenter analysis of 2018 data from Kantar) to Cheil Worldwide's McKinney. The appointment follows the collapse of the Hot-N-Ready pizza chain's former agency of record Barton F. Graf and a review launched in September. McKinney says it will handle the account out of its Durham, North Carolina and New York offices with support from Los Angeles. "First and foremost, we’d like to thank all of the agencies that participated in the review process. They put forth amazing work, which made the decision incredibly difficult to make," says Little Caesars Chief Marketing Officer Jeff Klein. According to two people close to the review, Goodby Silverstein & Partners also pitched for the account.

Beiersdorf selected Publicis Groupe as its global agency and transformation partner for its Nivea skin care brand following a review. The partnership takes effect in January and does not include media. The holding company says it will deploy its "Power of One" model on the account, creating a bespoke agency called One Touch to handle advertising duties for the brand. One Touch will be present in 40 markets with major hubs in New York, Sao Paolo, Cape Town, Dubai, Mumbai, Shanghai, Bangkok, Moscow and Hamburg. The review was handled by global management consultancies The Observatory and The Alchemists.

Justin's, the maker of organic nut butters and snacks, named independent agency Barkley as its agency of record following a review. The appointment ends the brand's relationship with former agency of record TDA Boulder. Barkley will handle the account from Boulder, Colorado, where Justin's is headquartered. Barkley assumes responsibility of Justin's brand strategy, creative, media planning and buying, social media strategy and design. The agency is tasked first with developing and executing a media campaign that will grow Justin's awareness and sales.

AXA, a French multinational insurance firm, completed a 10-month pitch process with the selection of Publicis and WPP as its agencies of record. Dentsu, Havas and Omnicom also participated in the review. Publicis retains AXA's global creative account across 30 countries while picking up strategy and media buying duties in four regions: Germany, the U.K., Italy and Hong Kong. Publicis says it will build on AXA's "Know You Can" brand strategy launched in 2019. WPP walks away with AXA's media business in nearly 30 markets across EMEA, Asia and Latin America. WPP says Wavemaker will handle the account in all markets except France, where GroupM will assume responsibility.

Infinity Marketing picked up two new healthcare clients: Crossroads and ARS treatment centers. The agency says it will provide integrated marketing services to support the treatment centers as they look to expand in new markets including New Jersey and Virginia. It will specifically handle strategy, digital media placement and creative for both brands.

BoConcept, a Danish interior design company and furniture retailer, named We Are Social in London as its global social media partner. The socially-led creative agency will be particularly focused on developing a global strategy for Pinterest for the retailer of 300-plus stores worldwide. We Are Social says the appointment comes as the brand looks to streamline its user experience on social. The agency says it already completed a "pilot period" with BoConcept, when it relaunched the brand's global Pinterest accounts.