WPP Is Investigating Claims About Agency CEO (and It's Not JWT's)

A handful of people who claim to be WPP staffers are calling for the resignation of Mauricio Sabogal, CEO of out-of-home media agency giant Kinetic Worldwide, in response to a blog post he wrote that they claim contains "offensive and discriminatory treatment and views of Americans," according to an email they sent to WPP CEO Martin Sorrell.

Mr. Sabogal, who is originally from Colombia, wrote the post in his native Spanish for Tumblr page "What's on Fire." He then tweeted a link to the post from his handle, @msabogalkw, on Jan. 22, 2015, when it was published. Both the tweet and blog post have since been recently removed. A cached version of the blog post can be found here. 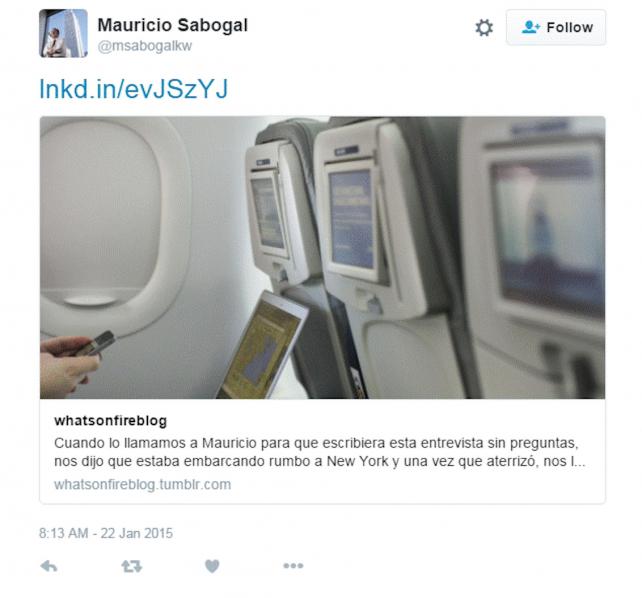 After discovering the post over a year later, a group of more than 10 people sent an email to Mr. Sorrell, using a newly created anonymous email address, in which they express their frustration with Mr. Sabogal's blog post and call for his resignation. The people behind the email include creative and media WPP staffers, three of whom work at Kinetic, as well as at least one non-WPP staffer, according to someone involved with the group. Ad Age obtained a copy of the email they sent to Mr. Sorrell.

"As proud Americans from diverse ethnic backgrounds we want want to bring your attention to Global Kinetic CEO's, Mauricio Sabogal's, offensive and discriminatory treatment and views of Americans," they wrote in the email to Mr. Sorrell.

"Mr. Sabogal offensively refers to Americans as 'gringos' and declares his view to the effect that 'the average American is ignorant, naive, uncultured and without passports,'" the email continued. The email is referring to the lines in which Mr. Sabogal referenced the movie "The Interview," which pokes fun at North Korea leader Kim Jong-un, and said that parodying a world leader that way is "a little bit the consequence of the typical ignorance common among the gringo population, that lack worldliness and a passport, and the yellow influence of CNN that exaggerates news to raise ratings," according to an Ad Age translation.

In the email, they also complain about the part of Mr. Sabogal's post that mocks "second and third generation Cuban Americans for adopting American names and according to him, for not speaking Spanish and not having true talent to manage the media business in Latin America."

A WPP spokesman didn't have any comment beyond, "We're investigating."

The people behind the anonymous email declined to comment for the record, and Mr. Sabogal did not respond to a request for comment.

Prior to taking on the CEO role with Kinetic, Mr. Sabogal was global CEO of IPG Mediabrands agency BPN, CEO of OMD Latin America. Earlier in his career, he was CEO of MindShare for the Andean region. He was also director of media services for Nielsen in Latin America.

The move comes as another agency, J. Walter Thompson, is in the news. The agency's Chief Communications Officer Erin Johnson has filed a lawsuit against CEO Gustavo Martinez, alleging that Mr. Martinez has "made it impossible for her to do her job," according to a lawsuit filed in the Southen District of New York.

The lawsuit alleges that Martinez expressed "an apparent comfort" in making constant racist and sexist slurs, "even on tape."

It goes on to describe his actions. "Martinez has no hesitation in referring in conversations with employees, including senior JWT executives, or the media, to his dislike of the 'fucking Jews,' his refusal to go places where he would encounter the 'black monkeys' or 'apes' who don't know how to use computers,' or to his publicly asked questions about which female staff member he should rape. On multiple occasions, Martinez has grabbed Johnson by the throat or by the back of her neck while talking to her. He has also asked other employees to leave his office for him to be alone with Johnson so they could talk about 'the sex.' In the presence of others, Martinez has exclaimed, 'Come here [Johnson], so I can rape you in the bathroom.'"

Mr. Martinez, who was born in Argentina and grew up in Spain, joined J. Walter Thompson Co. in 2014 as global president from McCann Erickson.

WPP has not yet responded to a request for comment.