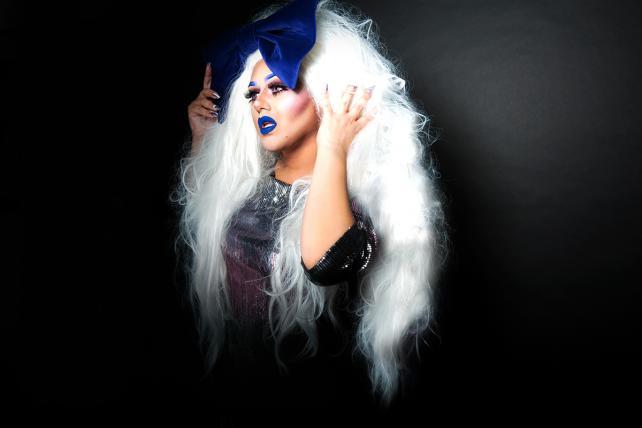 When Gianni Gurnani isn't brainstorming ideas for clients as a creative director, he's camping and vamping it up under his drag queen name, Gigi Giubilee.

Gurnani, a creative director at Leo Burnett Hong Kong who moved from the U.S. last February, says drag – wigs, heels, makeup and all -- helps him think more imaginatively and feel more confident when talking to clients and managers. We talked to him about his fabulous sideline.

When did you get into drag?
I started drag like a lot of gay boys do… on Halloween. I was in grad school at the time in 2010 at Virginia Commonwealth University Brandcenter and I bought six-and-a-half inch heels and a tight black dress and whatever else I needed for that night and when I walked into the room, jaws dropped. It wasn't done well. It was a hot mess. But it was a fully transformative moment and that feeling of being transformed and not being the same person people knew a couple of hours ago was addictive and I've been chasing that ever since.

When was your first drag performance?
A few months after that. I was still in grad school and I was in a bar in Richmond, Virginia and it was an amateur drag competition, so I invited the entire VCU Brandcenter. Fifty people came. It was nuts.

Did you have a stage name then?
Yes, my stage named had been Sheila Dubaii, and I just recently changed it – I rebranded. My new drag name as of now is Gigi Giubilee. People started calling me Gigi when I moved to Hong Kong and I like that name as a boy, so I was like, "Let me see if I can turn that into my girl name as well and unite the two identities."

What does a drag performance entail?
All sorts of different stuff. Drag queens do everything. We're entertainers, so it can be anything – standup comedy, dance performances, lip-syncing, aerial art, mud wrestling and even live singing.

What's your thing?
I do lip-synced, choreographed performances with backup dancers. Usually it'll be a friend or two I've roped in from whatever agency I'm at at the moment or a friend that will just do it because why not? So we'll practice and I'll mix the music and we get booked at a pride show or something and we perform.

How has all this helped your career?
There are pros and cons. It's helped in terms of being a fierce person and fighting. Being in drag builds steel in your bones. Even today, years after starting drag, putting on all that makeup and the wig and dress and heels, you walk out the door and still have your breath catch and think, 'Oh shit, what am I doing?' You still have that feeling because even though you know you look fabulous, you think, 'Everyone is going to look at me right now, so get ready for it.' So having the balls to do it and getting out there, that carries over to clients and being brave in front of a scary chief creative officer or going up to a manager and agency leadership and telling them what you think and saying it confidently and trying not to have your voice shake.

What about the work itself?
The tastes and aesthetics. As creatives, our ideas come from our gut and our gut is shaped by what we consume culturally. As a drag queen, living this kind of world, my diet has been all super gay drag queen stuff for years, so pop music, makeup, hyper femininity and all the kinds of stuff that's atypical for the typical cultural diet. I'm not saying everyone in advertising is the same, but there are certain kinds of archetypes in the creative department and this is not one of them.

You mentioned cons.
There have been other agencies in the past where you can just tell that when they talk about 'cultural fit' it's code for, 'We want people to look like us, talk like us, have the same sense of humor as us, watch the same TV shows and listen to the same music,' and that's just not a good match for me.

How did those agencies react to doing drag?
In the past at another agency, an agency head told me I'm not allowed to dress in drag for work events because it's unprofessional. And there have been times -- and this happens to almost every woman in the industry – where my ideas have been misinterpreted because people assumed they knew something about who I am as a person. So, if I wrote something a certain way, a creative director or CCO would read it in a different voice or tone than what I wrote because of who I am, but if they read something written by a straight white male, they would have read it in a different way.

How has it been at Leo Burnett?
Where I work now is celebratory of who I am and how different I am. Even in new-business pitches, there's no concern about the client being too conservative. It's not even a question that comes up. Being a drag queen is my personal life, but it affects my presentation at work as well. I wear makeup to work sometimes and women's clothes. I'm very flamboyant and colorful and the agency puts me front and center anyway.

Do you tell clients?
It's as often as you'd bring it up in normal conversation, so when you're getting to know someone and they ask what you're doing this weekend, I may say, 'I have a show tonight.' I just hosted our agency's spring lunch, an annual event in Hong Kong for agencies, in drag. One of our clients knew about it and asked what I was going to wear because they can see me wearing makeup as a boy. So later on I showed them my outfit and my white wig and they know it's just part of my personality and who I am. The transformation is mind-blowing always, but it's not surprising to clients that I would do something like that.

Does it help your relationship with clients?
It helps us connect because it's something interesting and they hire agencies for those crazy creative people. They don't want us to be just like them.

Have you ever invited a client to a show?
I would love to invite one. It just hasn't lined up in terms of timing.

How about coworkers?
Coworkers, of course. People always want to come. They always ask when the shows are happening. I've even had exec creative directors stay up until 1 a.m. on a weeknight to cheer me on and I've had 20 people from the office pay a $15 or $20 cover, so they're really supportive.

Have you noticed cultural differences as a drag queen in Hong Kong versus the United States?
There's not that much difference. The main difference here in Hong Kong, which is a little different than mainland China in that there's a lot of western influence here, is that it's a lot more shocking to see someone like me walk into the office in drag because there aren't people like that walking around the street. In the States you might see some characters. If you live in New York City or Los Angeles, you may see some interesting folks. Here in Hong Kong you don't really see that, but the levels of interest and acceptance are not lower.

What's the best drag story you have from your advertising career?
I did a performance a couple years ago at former agency for a fundraiser and at the end of number, my CCO was on his phone. And I was like, 'He has to pay attention,' so I pushed people aside and we locked eyes – and we didn't plan this at all – and he just gave me a huge kiss right on my lips and my liquid lipstick was all over his face. Everyone screamed and thought we planned it. We just knew it was what would make the crowd go crazy. And our biggest client was in the office that day [and heard about the kiss] and he was totally fine with it.