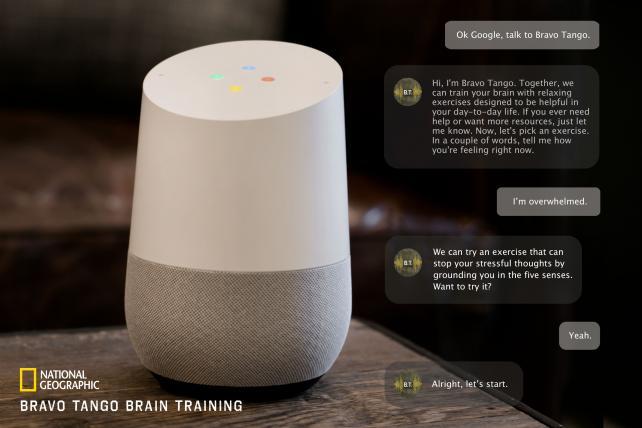 When National Geographic and 360i teamed up last fall to release a free voice-activated meditation app for veterans, it was an especially meaningful experience for the Corey Martin and Layne Harris. Both 360i executives had served in the military.

The Bravo Tango Brain Training app they helped create was developed in partnership with former Air Force Psychologist and combat veteran Dr. Michael Valdovinos and inspired by the true stories of service members and their families in the National Geographic series "The Long Road Home." The app can recognize more than 40 moods, such as anger, anxiety and sadness, and its exercises include breathing, visualization and muscle relaxation.

Ad Age spoke with Martin, 360i's head of influencer and marketing and PR, who previously served in the Navy, and Harris, the agency's head of innovation technology and a former serviceman in the Army, about how their military backgrounds played a role in developing Bravo Tango.

How did being in the military yourselves help with creating Bravo Tango?

Harris: These programs don't come along very often. We're marketers first. We're in advertising and this isn't something we're typically tasked with doing, so I was very excited to get to work on this

Because it involves veterans?

Harris: Not just because it involves vets, but because it's something beneficial to vets. Something you're going to get consistently when you talk to any veteran is that there really is a sense of connection. You feel more connected when you've served in that capacity, so that connection alone gets you excited and the idea of helping someone you feel connected with is a pretty emotional experience.

Martin: That sense of responsibility you have from being a veteran doesn't go away when you leave service. It's part of you. I'm still very close to many of the people that I served with. And as a publicist by nature and trade, it's rare that we get to tell and promote a story that really benefits something that hits home.

How does Bravo Tango work?

Harris: On the Google Home assistant device, which is a voice-activated device similar to Amazon's Alexa, you can create programs that can be invoked with a phrase to get started. In our case, the program is called Bravo Tango Brain Training, so you say, "OK Google, talk to Bravo Tango."

Does a voice respond?

Harris: We use all human voice actors for the voice because it was very important for us to have a human connection to the content. When you hear the voice, it feels very natural, like you're talking to someone in the room.

How did you know what type of words and phrases to use?

Harris: We worked very closely with mental health experts. Dr. Valdovinos is an expert in this and has worked pretty exclusively with vets around mental health issues so he helped design a lot of the program's content.

What happens when you start talking to the app?

Harris: It basically walks you through emotions you may be having and you can start from there to begin learning very simple, repeatable mental-health exercises that can help you deal with those particular issues, whether it's sleep or stress or maybe relating to your family – all the things veterans commonly experience when they're coming back from service of any kind.

So, it's a step-by-step process?

Harris: If you've ever done any sort of meditation or visualization exercise, it's kind of like a therapist-type of personality that will walk you through a series of instructions that can have you think about things to calm yourself down or use breathing as the mechanism.

Was the language crafted specifically for vets?

Harris: We didn't use flowery terms that would turn veterans off. We use words like mental exercise because we wanted to relate the idea of physical, fitness which is such an important part of military experience, so that mental fitness is something that can also be considered as just as important. It was very calculated and designed for veterans, so they feel comfortable and it feels natural for them.

Are people using it?

Harris: The stat we get most excited about is how long people are actually spending when they engage with a session. Obviously there are people who may just be curious about it and listen to the first part and then drop off, but beyond that, we get a very consistent daily use of people who spend up to 15 minutes listening to the content and using the same exercise over and over again. We're excited just to see that people are using this as a true therapeutic product.

Is this meant to help treat PTSD?

Harris: We try to treat this as an introduction to mental health therapy. We're not making any promises for any real breakthrough solutions, but it's to introduce you to the fact that you can help yourself and these are proven techniques that can have an effect on things like sleep and stress.

Martin: That was the importance of having Dr. Valdovinos involved. He's found the power of meditation and how it can really make a difference and reduce stress and anxiety and depression. That's where the heart of the program's efficacy is.

Mental health issues can still be stigmatized and difficult to talk about, and potentially more challenging in the military environment. Was this a concern when making the program?

Harris: Back when I was in the military, mental health issues were barely being talked about. I joined in 1987, so you can imagine that when it came to mental health, it just wasn't on the radar at the time. When I was injured in the military, I didn't have any sort of resources even close to this when I as transitioning back to civilian life, so I asked this to Sgt. Eric Bourquin, who is one of the people that "The Long Road Home" is based on. He's a combat veteran and war hero and he said over 10 years ago as part of his transition therapy, he was introduced to things like meditation.

Does the military seems to be focusing more on mental health?

Harris: Mental health is becoming a priority for the VA and veterans' organization and it's not becoming such a stigma anymore. Eric feels like the introduction of technology to make this even more prevalent and easier to access is fantastic and is something a lot of veterans will latch on to. It's something you can try in your own home without the stigma of having to schedule appointments at cost or traveling somewhere. If a veteran can try this on their own in private, this could encourage them to do so and be beneficial for them.

How did you spread the word about the app?

Martin: The media strategy was not only about generating awareness but establishing credibility, partnering with military organizations to help get the word out and also potentially have them make recommendations to their services members. We also donated devices and made sure there was some trial in the beginning and then we made sure we tied it to National Geographic show "The Long Road Home," which really did highlight and bring to life the journey of service members coming home after serving.