READ THIS NEXT
Agencies of the future may be unrecognizable—that’s a good thing
Credit: Illustration by Emile Holmewood aka BloodBros

The goblins attacked in the night, but steel and magic had beaten them back and slain their leader. Now the corpses of the child-sized gremlins were beginning to stink in the tropical heat. The cool air of the abandoned temple beckoned.

The frost maiden Blgvrg summoned her elk companion from the celestial planes. At her command, it cantered into the dark passage, hooves clattering against the worked stone. Forty feet into the tunnel, a sliver of gleaming metal flickered from the wall and the elk's head fell, severed cleanly from its shoulders.

Anna Edwards is incredulous. Just 20 minutes before, the creative director of copy at experience design company Elephant, new mom and reader of "fantasy books thick enough to break a toe," had discovered that her paladin could conjure a steed from thin air. "Doesn't it get a saving throw?"

Across the table, in a conference room at Firstborn, Gabe Garner pauses in thought. By day the senior VP of business planning for the agency, he is now the Dungeon Master, or DM, the supreme arbiter in a game of Dungeons & Dragons. "Sure, go ahead and roll Dexterity," he says.

Edwards tosses a colored, 20-sided polyhedral die into a felt-lined tray and does a quick mental calculation. She frowns. "That's a nine."

"Yeah, it's dead," Garner says with a small smile.

The body of the elk, momentarily arrested in midair by the real-world pause in the action, slumps to the ground in a bloody heap. We'd found our first trap in the jungles of Chult. 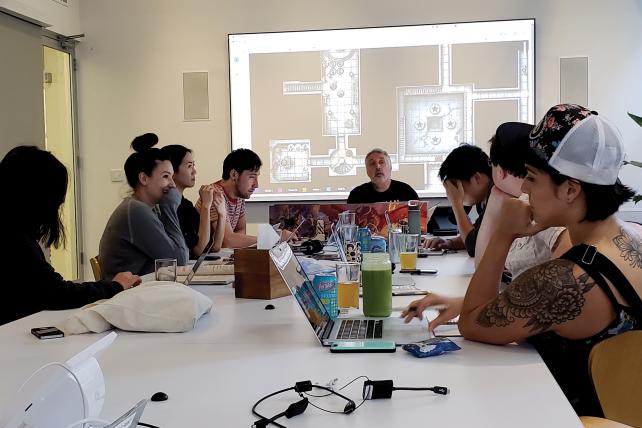 From basement to boardroom

It's a Wednesday night in late July at Firstborn. Two arcade games sit in the lobby, and a maker studio with a 3-D printer lives on the other side of the office. The agency specializes in digital executions, but right now I've joined six people in a decidedly analog pursuit. We're pretending to be dwarves, elves and magicians in a cooperative, collaborative game of make believe.

In this industry, "we spend a lot of time making things that don't exist," Garner says. "If you think about a website or an ad campaign, there's no physicality to them. This hobby has been a way for me to focus on things that don't need those digital tools to exist. It balances out some of the craft I need to do at my job."

This is the third game of D&D Garner has run at work. About 10 years ago, he picked up the 4th Edition of Dungeons & Dragons on a whim, after neglecting the hobby for decades. (The kids in "Stranger Things" play a version released before the 2nd Edition.) While at a different agency four years ago, he ran a short-lived game.

Then, a year-and-a-half ago, he invited a small group of coworkers and friends from outside Firstborn to play 5th Edition, the most recent version of the game. They meet every other week to fight monsters, loot ancient tombs and gallivant around a medieval countryside. They've already freed a barony from the depredations of a Gothic vampire, and now they're playing through the most recent official D&D adventure, "Tomb of Annihilation," an Indiana Jones-style trek through unexplored wilderness in search of the means to cure a terrible curse.

"There's something refreshing about sitting at a table with people and, as a group, creating this epic story out of our collective imaginations. I really feel like it's a creative outlet," says Alex Krawitz, senior VP of content development at Firstborn, who plays James Valon, a ranger (like Aragorn from "The Lord of the Rings").

D&D and other role-playing games have been around since the 1970s, and some of the kids who played decades ago are now adults who parlay their childhood interests into content—whether it's a TV writer who inserts D&D references into scripts or a world-builder like Marvel director/executive producer Jon Favreau, who admitted to The Los Angeles Times that he leans on skills the game taught him to create coherently interwoven plots. (Or even a journalist at a trade publication who's been playing for 25 years and records RPG podcasts on the side.)

Those pop-culture appearances in shows like "The Big Bang Theory" and "Community," along with the unabashed, vocal fandom of celebrities like Stephen Colbert and Vin Diesel, and the advent of "actual play" livestream games like "Critical Role," have led to a resurgence of interest in the pastime. Half of new players make their way to the game after watching a streamed game, according to Hasbro, which owns D&D. (Yes, streaming and watching someone else's D&D game is a thing.)

In fact, D&D is having its "best year ever," said Hasbro CEO Brian Goldner in an earnings call last month. He singled out the game and the popular collectible card game Magic: The Gathering as strong performers. Both are owned by Hasbro subsidiary Wizards of the Coast, which old-school fans may remember bought the original publisher of D&D, TSR, in 1997. Just last week, The Martin Agency was named agency of record for Wizards of the Coast.

Firstborn isn't the only agency fostering tabletop culture. "It's kind of funny to see a bunch of famous people playing now," says Paul Williams, a production designer at Huge who runs a weekly D&D game as one of the agency's 16 in-house social groups. He still remembers the bad old days of gaming, when people who played were on the lowest rung of the social hierarchy. "But I'm happy that D&D is now on The New York Times Best Sellers list. The culture is great."

Seven players participate in Williams' biweekly sessions of Tomb of Annihilation at Huge. (They're levels 10 and 11, and about to finish the module. With any luck, they'll survive.) Alternate weeks are pickup games for agency employees who aren't regular players but are interested in learning more.

Unlike at Firstborn, the game is agency-sponsored, so it's only open to Huge employees. That's a bit of a carrot for gamers, says Williams: "I have a regular freelancer who says he picks the jobs here over other offers he gets because he wants to come play with us."

A most demanding client

Back in the temple, my barbarian Hroan deftly discovers the second trap, a covered pit, by falling headfirst into it. A gout of flame singes Gideon the rogue's face after a pair of poor rolls by his player, PJ Ahlberg, executive technical director at Stink Studios New York, though he spots a pattern in the triggering mechanism. Milosh magically transforms into a giant spider, an arachnid as large as a full-grown man, and uses its wall-crawling ability to skitter along the ceiling and avoid other traps.

The only door that leads further into the temple radiates an aura of magic that worries the party. Eric Decker, VP of technology, at Firstborn, scrutinizes his character sheet, a record of his in-game capabilities dotted with the grayed blotches of regular erasure. "What if I cast Dispel Magic on the door?" he asks Garner. 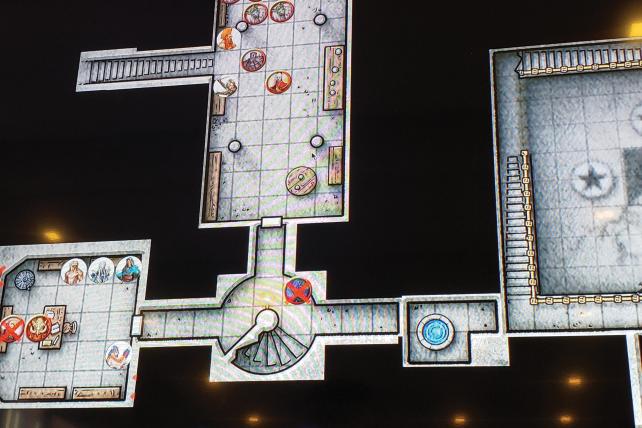 Close-up of dungeon maps at Huge.

This is the kind of interaction Decker likes. In D&D, "the story comes first, and then the gameplay aspects supplement that. At times the DM can bend the rules of the game to favor the story. That's something that you don't get in digital today," he says. "No matter how much freedom a video game claims, it's always a system of rules that you are following, and your creativity is bound by them."

Garner agrees his idea could work, so Decker's character Mouser, a quirky sorcerer, casts a spell to break the enchantments on the door, which swings open on silent stone hinges. Inside, atop a towering plinth rests a rune-scribed clay jar.

There's much discussion about how to grab the jar and escape. Do we replace it with a bag of sand of equal weight? Tie a rope to it and yank hard?

Before the group reaches a consensus, Milosh lowers himself on a silken strand from the ceiling and grabs the jar. The room begins to shake, and everyone is pelted with chunks of stone from the collapsing roof, forcing a mad dash back to the relative safety of the jungle outside and prompting a chorus of cheers when everyone makes it out alive.

"My job is about building a narrative and then sweating the most minute details to solve problems—a direct reflection of D&D," Edwards says. "I guess in this scenario, the DM is like a client. If he's not happy, we're fucked."