Their Names May Not Be on the Door, But Adland Couldn't Find Function Without Them
READ THIS NEXT
600 & Rising dissolves 'current structure' as Nathan Young steps down

To the outside world, an ad agency is only as good as its creative bigwigs. But behind every good agency are strong administrative assistants. We're pulling back the curtain on some of the stalwart administrators of adland who keep their agencies running.

MAMA JO
You might think the self-confident, leather-wearing, 69-year-old Mama Jo got her name from her days as a member of the Buffalo Soldiers motorcycle club or the circle she ran in as a cage dancer at Studio 54. But the name, tattooed on her left arm, is actually from her "family" at Razorfish, where she's been manning the front desk for 17 years.

"I'm the caretaker," she said. "Most employees come straight from college. Some have never been to New York to work or live. I become the mama. They come to me and talk to me about things they wouldn't talk to mothers about."

Mama Jo recalled a time when she and Jim Warner, former exec VP of Avenue A before it became Razorfish, both started weeping.They felt defeated after a bunch of employees left. She prides herself on knowing when someone is unhappy. It's a skill Mama Jo acquired since leaving her hometown of Wheeling, W. Va., and moving to New York as a single mother. "I came in '69 with six boxes of clothes and a baby on my back," she said. "I [go-go] danced at night and worked during the day."

She lives in Harlem and every year she throws herself a birthday party -- this year's drew 349 people.

JAY BENNETT
Executive assistant Jay Bennett can track down his boss, Havas Media CEO Lori Hiltz, at the snap of the fingers. But when it comes to scheduling time with Mr. Bennett to talk about Mr. Bennett, all bets are off. He's entrenched in everything that happens at the top level. But he's not all business, which makes him such a gem at the serious, French-owned Havas. For one, he does an impeccable impression of his friend Dr. Ruth. 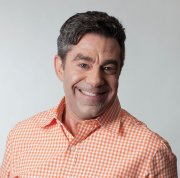 Dr. Ruth only scratches the surface of stardom for Mr. Bennett. After moving to New York, he fell into a "10-year association" with drag maven Divine. "I was his assistant and best friend -- we traveled all over the world doing films, plays, television and records." Mr. Bennett was a backup singer on Divine's dance hit "Native Love," as well as the shadow under the bed during a love scene in "Lust in the Dust" starring Divine and actor Tab Hunter.

Ms. Hiltz said he once danced on a table to lighten the mood after the agency had been preparing for a pitch for many hours. "The first time I did that I got in so much trouble with our CFO, he insisted I never do it again."

It's that humor that initially won over Ms. Hiltz. "I've always fallen into fun and interesting jobs," said Mr. Bennett, who lives in Sunnyside, Queens, with his cats Blossom and Buttercup. "They came my way through the universe somehow. "

JULIE GARNER
For almost 20 years, Julie Garner has been the "irreverent" and informal voice behind John Adams, chairman of The Martin Agency. 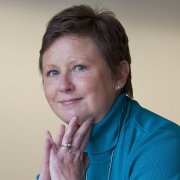 "John to me is like a big brother," she said. "He's someone I've always admired. I think of myself as the bratty little sister."

Ms. Garner is an administrative assistant with a VP and executive manager title. She's earned it. Her loyalty goes beyond a 65-mile drive every day to the Richmond, Va., office. She once drove through a category-two hurricane to assist with a new-business final presentation in New Jersey. And for a last-minute BMW pitch that took place at the shop's offices on a Saturday, she spent the morning slaving away over her signature homemade pizza using the office's tiny oven.

When she's not customizing fortune cookies for a group of executives or making homemade popcorn for the shop -- a creative director at the shop branded it "crack corn" -- she's focused on her nonprofit, Project Yellow Light.

She and her husband started Project Yellow Light after her son was killed in a car accident. To keep his memory alive and educate teens about the dangers of texting while driving, she holds an annual scholarship competition for teens, tasking them with creating a video that encourages their friends to avoid distracted driving.

DAVEE
Sodavy ("Davee") Ek has two separate jobs. She's the 28-year-old receptionist for Colle & McVoy, a Minneapolis-based ad shop owned by MDC and Partners, and she moonlights as a fashion director and stylist at I Am Minneapolis.

Over the course of her two years at C&M, her worlds have collided. "The advertising industry naturally fosters a creative environment, so I've definitely gotten a chance to show off my fashion chops," she said. "Aside from getting daily inquiries on fashion advice from co-workers, I had the opportunity of styling the CEO for a magazine cover/editorial, working on some product styling for a client and providing fashion tips via the agency blog."

She also orchestrated a style makeover for a creative director.

What else does she bring to the table? Chocolate. When asked if she knows all staffers, she said: "Yep, all 240 of them and their favorite types of chocolate (they've got quite a knack for devouring all things chocolate here)."

JUAN SANTOS
To visit an agency based in a New York City high-rise, you typically have to go through security at the front entrance. And most of the guards, employeed by a building owner, have a simple task: check identification, man the sign-in sheet and make sure everyone going up has an appointment. Not Juan Santos. 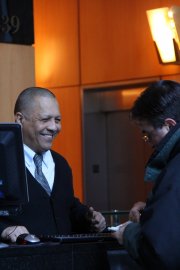 Mr. Santos, the guard in the lobby at McCann's headquarters at 622 Third Avenue, is employed by the agency. He's the first person to greet arriving clients and visitors and "he's all in," as the agency puts it. For example, he wore a "psychedelic Joe's Crab Shack" t-shirt for that pitch, a postman's uniform for the USPS pitch and he was a ship's captain for another. "He's always up for anything," said an agency spokesman. "We kid him about maybe pitching Victoria's Secret."

After discovering his "latent acting talent," the shop cast him in most of the group's culture videos. "At a recent agency fashion show, he elegantly descended our grand staircase -- to tumultuous cheers -- dressed as a dapper, hat-and-cane bon vivant, his eyes twinkling, his delight infectious," said the spokesman. "Juan has been with the agency for a decade. Or maybe forever. We love him."

MICHELE BIALOS
Michele Bialos, office manager and assistant to chairman and CEO Daniel Morel, has gone to great lengths for her boss of 13 years. Literally.

In 2007, Mr. Morel traveled to Thailand to meet with Geoff Collins, a former managing director of Wunderman Bangkok, and break ground at the Wunderman School located in Laos. Mr. Morel arrived early in the Thai city of Chiang Rai to get acclimated to his mode of transportation -- an off-road Yamaha 250cc dirt motorcycle. What ensued was a collision with a BMW, sending Mr. Morel over the car and into a ditch.

Upon hearing that he had broken two legs and several ribs, his assistant Ms. Bialos immediately boarded a plane. She arrived in Thailand, arranged for transportation and a doctor to accompany the party back to the United States and escorted her boss home.

"There was a great deal we had to contend with, including the local police and securing FAA clearance to make sure he could travel on a stretcher in the plane," she recalled.

They arrived back in the States in (almost) one piece, and Mr. Morel was forever grateful.

KAREN LYNCH
Karen Lynch has been an executive assistant at BBDO New York for 33 years. For the last 10, the North Carolina native has worked for John Osborn, president-CEO of BBDO, New York. Prior to that she worked for legendary BBDO Creative Phil Dusenberry for 22 years.

Ms. Lynch supported Mr. Dusenberry while he served as a member of the "Tuesday Team," which was responsible for producing Ronald Reagan's presidential re-election convention film.

More recently, she's helped Mr. Osborn juggle his numerous roles, not only as CEO, but also with his involvement in the Police Athletic League, American Red Cross and the Christopher & Dana Reeve Foundation. When he wanted a treadmill desk, she researched it and ultimately set it up.

"Karen sometimes knows more about me than I know about me," said Mr. Osborn. "Without her, I would never be able to get done what gets done. She's loyal and a great soul. And she puts up with my antics!"