Call It the Rise of the Side Projects

Some of the most inventive and buzzed-about work of the past year has been initiated and produced outside official client briefs. The "side project" has taken on a new meaning lately, as great ideas can more easily find an audience and creative and tech talent work across more disciplines.

In some cases, these projects are useful outlets for creative energy and a good way to build new skills; in others, they become full-blown businesses.

Here, a handful of talents whose self-driven creations resulted in publicity, money or, if nothing else, sanity. 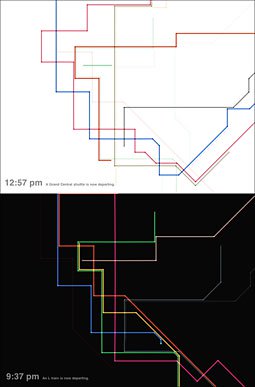 Alexander Chen, an interactive designer at Google Creative Lab, struck a chord in the creative world when he turned the train paths of the New York subway into an interactive instrument at mta.me. Mr. Chen explains: "As a viola player and a designer/ programmer, I thought it would be interesting to start experimenting with an interactive plucked instrument. Once this proof of concept was done, my mind wandered with the possibilities of what real-world lines could serve as strings. Maybe because I had just moved to Brooklyn, I often found myself staring lost at a subway map. I had seen a beautiful large print of the Vignelli map, which is iconic among graphic designers."

He has long been interested in turning everyday surroundings into musical experiences. An earlier project, Sonata for the Unaware, used video footage of commuters in Philadelphia stations as data to generate music. Even so, he describes the response to his project as "unexpected."

"I think it's the universal familiarity with the subway map that attracted people, and how it turns a normally chaotic experience into something calming."

Zach Hilder, a creative at BBH, New York, created his Fuck Photoshop pencil as a personal comment on design and advertising today. "I'm not anti-Photoshop in any way," Mr. Hilder said. But to me, the best ideas can exist on pencil and paper alone. With a pencil, there's nothing you can hide. It's raw and pure. The idea must be judged on its merit, not its varnish," said Mr. Hilder.

Posted on his Etsy store back in February, the pencil quickly went viral among designers (and fans of profanity, and Photoshop haters and pencil aficionados) everywhere.

So far, he's had nearly 160,000 visits to the store and has sold more than 500 pencils. "One of the first orders I got was from the photographer Andrew Zuckerman," said Mr. Hilder. "Being such a big fan of his work, it was so cool that he was into mine. To this day, I get three to four orders a week from all over the world -- Slovakia, Australia, Sweden and even the exotic outpost of Warren, Mich." 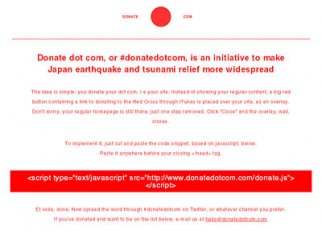 In the wake of the tsunami in Japan, Stockholm creatives Jakob Astrom, Martin Lofqvist and Isak Burstrom teamed up to ask website owners to donate their home pages to a message dedicated to relief efforts. At DonateDotcom.com, visitors simply add the name of their own site and the donation message appears as a welcome screen on their home page, linking to the Red Cross through iTunes, before visitors can proceed to the regular content.

Mr. Astrom, a freelancer and former creative at Great Works, and Mr. Lofqvist, art director at Great Works, wanted to do something that "engaged [primarily] people in the same business as us, meaning digital advertising," Mr. Lofqvist said. Ruling out the social networks due to constant overload of hashtags, tag-you're-it-campaigns, etc., we found ourselves right where it all started: our own home page." Mr. Burstrom, tech creative at Great Works, came up with the idea of the Javascript snippet that enables the process. Mr. Astrom said the site has received donations from many agencies, great press and around 100,000 visitors. 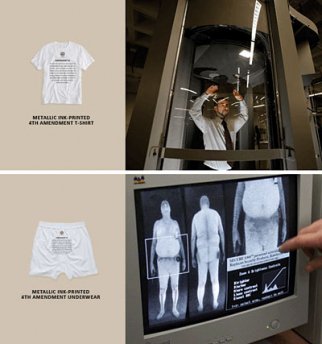 Matt Ryan and Tim Geoghegan, then both creatives at CP&B, conceived 4th Amendment Wear to protest the newly broadened search procedures of the TSA. They created undergarments inked with a metallic version of the Fourth Amendment of the U.S. Constitution, which becomes visible when travelers pass through TSA X-ray scanners.

Within hours of its launch, the media picked up on the story, and the press coverage exploded. Its initial run, sold on the pair's Etsy page, sold out within two hours of launch. After taking thousands of preorders and requests, they ended up forming a business, and are about to launch 4th Amendment Wear on a mass-production basis.

"4th Amendment Wear has been a real DIY journey and an amazing learning experience," said Mr. Ryan, who recently joined Publicis Mojo in Sydney. "We had to figure out each step from scratch. ... It showed me that anything's possible when you've got an idea you personally believe in, and one that you're convinced will engage people."

McKinney copywriters Jenny Nicholson and Stevie Maple invented the Twerrible Towel in support of the Steelers for this year's Super Bowl. The idea? A towel attached to a fan motor spun for every #Steelersnation-tagged tweet.

"When the Super Bowl came, we wanted to do something cool," said Ms. Nicholson. "We teamed up with a producer and Steelers diehard, Ben Eckerson, and the three of us put together a team and got the site from concept to launch in about 11 days. In five days, the site had more than 50,000 unique visitors from 102 countries, 18,494 viewer hours and 46,610 twirls. Not bad for $193."

Ms. Nicholson also worked on Spent, a self-driven interactive campaign created for agency client Urban Ministries of Durham that used gaming and social media to educate people about homelessness. She says it taught her that " if you have a good idea and a ton of passion, people will line up to help you make it a reality."

McKinney encourages such beyond-ad experiments among its staff and in December, spurred in part by the success of Spent, created a sort of "10 Percent Time" initiative to foster entrepreneurial ideas and expansion of creative skill sets.