In an announcement posted to Cadillac's website on the Friday afternoon before 4th of July weekend, Mr. Ewanick said: "Fallon's deep, 17-year experience with other luxury automotive brands like Porsche and BMW makes them a perfect fit for our flagship brand." Don Butler, VP-Cadillac marketing, in the same statement hinted at a new marketing platform for the brand by saying, "We look forward to working with Fallon to illuminate Cadillac as the new 'Standard of the World." 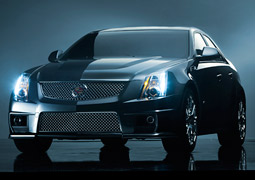 "We're looking forward to helping chart a bold new course for this great American brand" said Chris Foster, Fallon CEO, said in a statement. "Our commitment is to brave work that makes a difference and our work with Cadillac will give us the opportunity to further realize this." Agency founder and Chairman Emeritus Pat Fallon said, "It's a privilege to be invited to work with such an iconic brand and to reconnect with Joel. Great things will happen."

That the Minneapolis-based agency has been awarded responsibilities for Caddy means that its engagement with Chrysler -- for which it was awarded brand duties in December -- is over.

"We're proud of the work we did with Chrysler and wish them well going forward," said Mr. Foster.

That news seems to have come as a surprise to Chrysler, though, since a spokeswoman in an e-mail today told Ad Age: "To date, Fallon is the lead agency for the Chrysler Brand."

Chrysler's fate
The fate of advertising for brand Chrysler remains to be seen, but it means yet another agency change. Under the new management of Fiat head Sergio Marchionne, it has completely redone its agency roster, bringing aboard a long list of new shops such as Wieden & Kennedy, the Richards Group and SapientNitro.

Mr. Ewanick's move reunites him with Fallon, which he worked with 20 years ago on Porsche advertising. While the agency indeed has a history producing much-talked-about work for Porsche and BMW, such as its "BMW Films" series, it's unclear if any of Mr. Ewanick's old cohorts, or other folks who worked on that legendary car advertising, are still there.

Scoring the Cadillac account is huge for Fallon, which struggled for a few years but more recently has shown an ability to prevail in new-business pitches to win spots on the rosters of marketers such as General Mills and Purina. Still, it will be a massive undertaking for agency, which has a single office in the U.S. in Minneapolis and will open a Detroit hub.

In its short tenure on Caddy, BBH got out just one round of work, mostly print and TV ads, that carried a new tagline, "Mark of Leadership" -- which Mr. Ewanick expressed his distaste for soon after arriving at GM. At press time, it was unclear how many layoffs the loss could spur for BBH, which released a statement stating it first learned of its firing by reading about it in Ad Age. BBH representatives could not be immediately reached.

Second major change
The agency switch is the second major change Mr. Ewanick has made since arriving at GM in May. He also moved advertising duties for all Chevy brands to Omnicom Group's Goodby Silverstein & Partners, which he worked with during his stints at Hyundai and Porsche, from Publicis Groupe's Publicis. Like BBH, Publicis also learned of its ouster via press reports.

According to industry executives, Publicis Groupe CEO Maurice Levy and others worked hard to keep the Caddy account within the holding company, and are believed to have pitched an alternate solution, a dedicated agency, to service the account under Publicis.

According to one person familiar with the situation, it has been fending off rival holding company Omnicom Group, which is trying to secure more GM business. It recently picked up GM's largest account with Goodby's Chevy coup and Omnicom CEO John Wren is said to have been working to secure more. Omnicom representatives could not be immediately reached.

Cadillac has seen a spike in sales with the improving economy, coinciding with its engagement with BBH. GM yesterday reported that it moved 11,788 Cadillac vehicles in the U.S. last month, a 39% jump over the same month in 2009 and the fifth consecutive month of year-over-year sales gains. Through the first half of 2010, Cadillac sales are up 33% compared to the year-prior period.

In addition to brand advertising, Fallon will likely be tasked with the launch of the 2011 CTS Coupe and promoting a new perk called "Cadillac Premium Care Maintenance."

"We're strengthening the line-up with a distinctive new vehicle and elevating the brand by providing owners with a long-term commitment to customer service," Kurt McNeil, VP-Cadillac sales and service, said yesterday in a statement.