Some ad agencies could feel the pinch as shutdown drags on 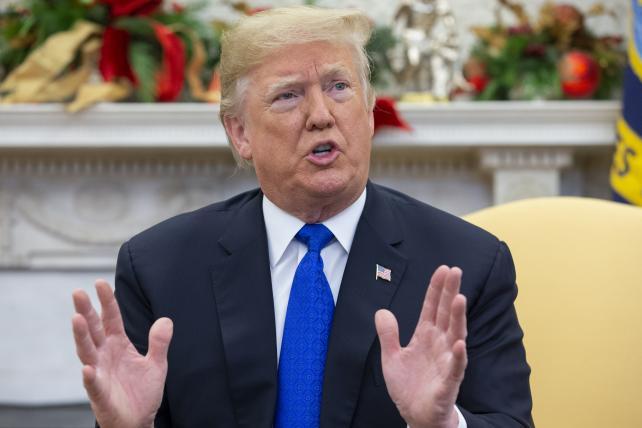 President Trump during a meeting with Rep. Nancy Pelosi and Sen. Chuck Schumer on Dec. 11, where he said he'd be
Credit: Michael Reynolds/Pool via Bloomberg

Not all ad agencies are getting a fresh start to 2019. Some shops that count the federal government as a client could soon feel the financial strain of the shutdown, which is now nearing two weeks in length. Delayed payments, disrupted campaigns and the postponement of agency appointments are all potential outcomes should the shutdown continue, according to experts.

The U.S. government, which is number 46 on the list of leading national advertisers compiled by Ad Age's Datacenter, spent $949.3 million on total advertising in 2016, up 3.5 percent from 2015. More than half, or $500.5 million, of that budget was spent on measured media, Datacenter found. The government's largest advertised brands include the Army, Health & Human Services, U.S. Postal Service, Air Force and Navy.

"Shutdowns are bad for business no matter what business you're in," says Sam Berger, a senior advisor at the Center for American Progress, a think tank. He notes that in addition to delays in payments, the shutdown also creates "an inability to talk to the contracting agency about services to be provided and for those folks looking to get new work, no decisions can be made or contracts awarded until the shutdown is over."

The partial shutdown began Dec. 22 as politicians failed to reach a budget deal over border wall funding. This is the fourth-longest shutdown in history, according to CNN, which referenced a 21-day suspension in 1995 into 1996, as well as a complete shutdown in 2013.

Ad agencies working with the Department of Defense appear to be in luck — the president signed its appropriations bill in September. That means agencies like Omnicom's DDB, which won the high-profile Army account in November; JWT, the longtime agency for the Marine Corps; or GSD&M, which oversees advertising and special events for Air Force Recruitment, shouldn't face disruption in their work on those clients. Those agencies either couldn't be reached for comment or declined to comment.

However, agencies that work with other departments including the U.S. Department of Agriculture, Department of Transportation and Forest and National Parks Services could face the effects of the shutdown.

Kevin Kosar, a VP of policy at the Washington, D.C.-based R Street Institute, says any disruption for advertisers would be contingent on whether the appropriations bills — which provide funding for various government departments — are expired. The U.S. Postal Service, which works with IPG's MRM/McCann, is a self-funding agency and is thus not affected by shutdowns, he says. MRM declined to comment.

An advertiser may also run into trouble with the execution of campaigns if its federal agency client has an expired appropriation.

"Certain steps may get gummed up, they may be stuck in limbo," he says.

'A very immediate effect on business'

The Federal Communications Commission suspended most operations on Thursday. Experts said the ramifications of the suspension depends on the length of the shutdown, but it's likely a Jan. 30 public meeting will be delayed, according to Laura Phillips, a telecom lawyer at Drinker Biddle & Reath. She noted that pending transactions such as the merger between T-Mobile and Sprint may take longer than expected.

"The effect of an FCC shutdown depends somewhat on the length of the funding impasse," Phillips said in a statement. "But for companies with projects that rely on FCC licensing, it will have a very immediate effect on their business," she added, noting a backlog on licensing could be "an issue for some."

Banks including Wells Fargo and Bank of America have offered program assistance for federal employees affected by the shutdown. A Bank of America spokeswoman says that businesses that may have been impacted should contact the bank about options for assistance.

As the shutdown faces its 13th day, news reports of overflowing toilets at parks and disappointed children at the zoo have published alongside articles detailing potential plans to reopen the government on a temporary basis before a full deal is reached. The Smithsonian and National Zoo announced their closures on Wednesday via social media.

Many consumers voiced their concern for the zoo's animals and lamented the closures.

are the animals safe and still being taken care of?

Does anybody have any recommendations of what to do in Washington while these museums are closed? I am there from Monday for three days and we won't know what to do if they are all closed! So disappointed 😔