Agency Brief: An updated way to call out sexism; Wongdoody gets acquired

Dust off your finest shorts tuxedo and your Chucks — it's that time of year again.

Thursday brings my very first Age A-List & Creativity Awards Gala, which I'm told is a raucous affair filled with fabulous outfits and after-party Patron shots (which, for the record, I plan to stay far, far away from).

If you're headed to the gala, come say hello. I'll regale you with what I think is a hilarious story about a rogue iguana during a coffee break earlier this week at the 4A's. Anyone who doesn't laugh is getting immediately kicked off the A-List.

Now for what you actually came here for: Some agency news from this week.

Wongdoody gets snapped up
Wongdoody (a multiple winner of Ad Age Small Agency Awards) has been acquired by Infosys, a tech services and consulting giant based in Bengaluru, India. According to Infosys' fourth-quarter and year-end results, Infosys entered into an agreement to acquire WongDoody Holding Company for a "total consideration of up to $75 million including contingent consideration and retention payouts," subject to regulatory approval and fulfillment of closing conditions.

What's in it for Wongdoody, which has offices in Seattle and Los Angeles? As the agency's CEO Ben Wiener puts it, this gives the agency "instant scale" and expertise to build "brand platforms for the future." "This is a unique marriage of digital strategy, creative and technology talents to build the agency model that modern CMOs are demanding," he said in a statement.

For Infosys, it's the latest in a series of moves to help its customers with digital transformation in the areas including strategy, design, user experience and creative. Infosys has also acquired Brilliant Basics, a London-based digital design and customer experience firm. 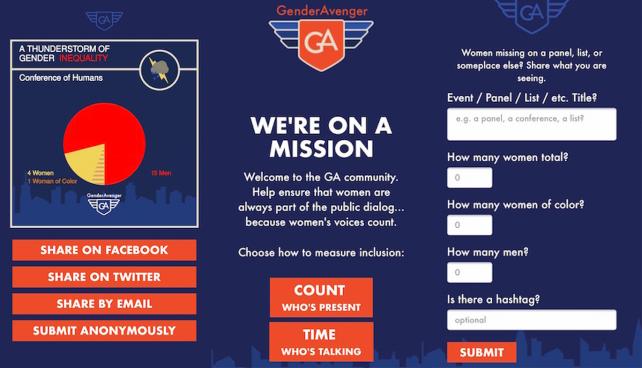 GA Tally gets some new features
If you didn't sleep through January, you might remember the controversy around tech conference CES and the fact that it was light on solo female keynotes (actually, it didn't have any at all). The group that alerted the world to that fact was GenderAvenger, which is dedicated to ensuring "women are represented in the public dialogue."

GenderAvenger this week announced it has updated its tool, an app called "GA Tally." The tool is meant to track how many women — and in particular, women of color — speak or have a chance to participate. The app can also be used to track how much time men and women speak onstage, at a meeting or on TV — which can be made into an easily shareable image that can be shared on social media.

For its makers, it's a easy way to call out gender and race inequality in public life (meaning ad conferences or anywhere else).

People are getting too crazed about digital data. It's only used for personalized messaging. You still have a brain and can control your response. If you don't like targeting, I hope you enjoy the image below, because this is what your future ads will look like. pic.twitter.com/5zTtNsSdtH

Gore-Tex warms up to Dentsu
W.L. Gore & Associates, known for its signature Gore-Tex innovative fabric, just named Dentsu Aegis Network as its global media agency partner. The 60-year-old Gore, which is headquartered in Newark, Delaware and used by retailers such as LL Bean and Marmot, is reinventing itself for the modern consumer. Consultancy Flock Associates handled the media agency search, which began earlier this year. According to a release, Gore wanted an agency able to "integrate digital-first ideas with traditional channels." Gore recently appointed WPP's AKQA its lead creative agency as well.

Mekanism Takes N' Bakes
Papa Murphy's has a new creative agency in Mekanism, following a competitive pitch. The agency's managing director Lisa Zakroff said in a statement she was excited to "take home a lot of mushroom, sausage and pepperoni-themed 'market research.'" The brand spent $29.8 million in measured media in the U.S. in 2017, according to Kantar Research. That's a lot of pepperoni.

MediaLink hires Ebiquity alum
MediaLink has hired Nick Manning, formerly chief strategy officer at Ebiquity, as a senior vice president. Manning, who had previously been CEO of OMD in the UK, will focus on MediaLink's Europe expansion. Chairman and CEO Michael Kassan said in a statement that Manning has "launched and built some of the most respected media agencies and consultancies in the industry, and he's widely sought-after by industry leaders for his perspective and analysis" and that his leadership and foresight would be a "massive asset" to MediaLink's growth and its clients.