Happy Friday, and National Coffee Day, which is convenient because everyone could probably use a little extra caffeine after the whirlwind of Advertising Week. Speaking of which, if you want a quick look back at the week, click here for our coverage, including our daily blog posts.

Now, before getting into this week's Agency Brief, check out the photo below of Trevor Noah, host of Comedy Central's The Daily Show, leading festivities for the 4A's Centennial Gala on Wednesday night. 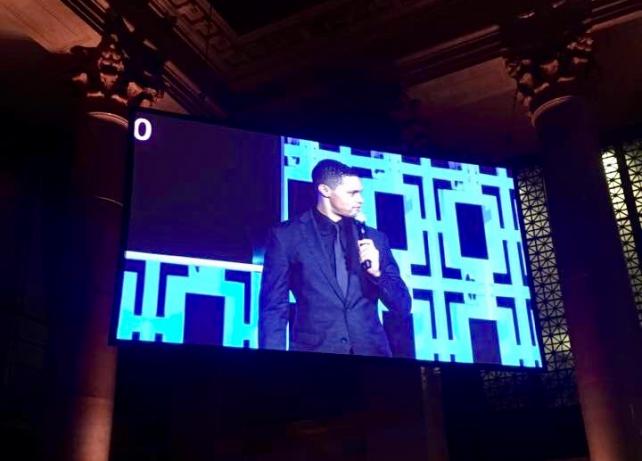 Don't go breaking my heart
CP&B Boulder and Edelman have been named the first global advertising and PR agencies of record, respectively, for the American Heart Association. The agencies, which emerged victorious following a six-month competitive review run by Pile & Company, will help the nonprofit become more relevant and modern. Prior to CP&B and Edelman, AHA worked with a variety of agencies to support its programs. The decision to bring on two dedicated AORs is part of the brand's move to become more aligned with its brand vision for the future.

Ahoy! Wavemaker gets new client captain
Wavemaker (the new name of the MEC/Maxus merger) has had a fair share of sea change in recent months. Forgive us—the boat puns are just too easy. The latest: A new global chief client officer, Aaron Smith, who is joining the company from global brand and marketing consultancy Prophet, where he was partner in the company's Chicago office. Wavemaker/MEC Global CEO Tim Castree says Smith was a "perfect choice to head up a client leadership practice that delivers on our purpose to grow and transform our clients' brands through unique purchase journey insights and a deep understanding of their business needs." Smith joins on October 2 and will be based in the Chicago office.

Changing of the chairs
The 4A's, which celebrated its 100th anniversary with a gala during this week's New York Advertising Week, has named Butler Shine Stern & Partners Founding Partner Greg Stern as its new chairman of the board. Stern, who will take on the role as of October 1, succeeds Bill Koenigsberg, founder and chief executive of Horizon Media. Previously, Stern was a director and vice chair on the 4A's board.

Let's get experiential
FCB Chicago has named Kim DeNapoli as the lead for its experiential practice, FCBX. DeNapoli, who joins the shop from Ogilvy, will report to FCB Chicago President and CEO Michael Fassnacht. Aside from leading the experiential operation, DeNapoli will work to amplify collaboration with teams such as creative, digital, and social to help deliver integrated activations and events. Most recently, she was served as the department lead and executive producer of experiential and content development at Ogilvy.

Dallas digs
Project Worldwide's experiential marketing agency George P. Johnson has expanded to Dallas to continue supporting its 50-year long relationship with Toyota and Lexus. The Dallas move marks GPJ's second office in Texas, after the agency opened one in Austin five years ago. So far, the Dallas operation has about 25 staffers and is being led by Blake McKinney, who joined the agency from The Richards Group in August. Now, GPJ has offices in 30 cities worldwide.

Your ceiling at 4AM: Brought to you by #NationalCoffeeDay pic.twitter.com/3kjVlM6tLq

Number of the week
3 – the number of judges announced this week for the inaugural Athena Advertising Awards, which aim to honor creative advertising that tell the stories of strong women. The judges include: Pam Fujimoto, executive creator director of Wongdoody; Liz Taylor, chief creative officer of FCB Chicago; and Jon Levin, manager of Roar. The awards will be held on November 3 at the 3% Conference in New York City.