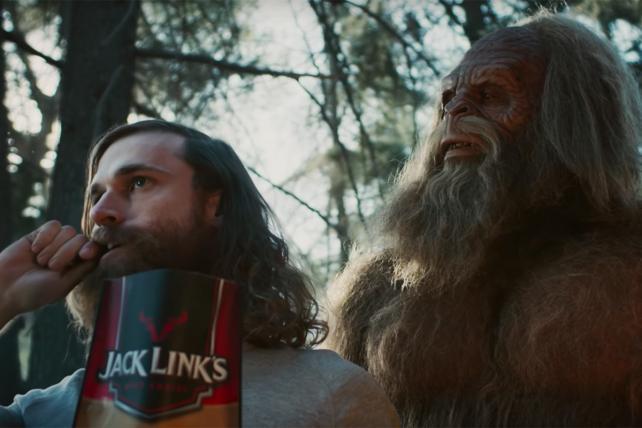 Happy Groundhog Day! Six more weeks of winter is in store for us, according to good old "Punxsutawney Phil" and the little mammal's annual tradition of predicting the weather.

Before heading into this weekend and watching the Big Game on Sunday (mostly for the commercials, obviously…), let's see what's in store in this week's agency news roundup.

Beefing up marketing
Jack Link's, the jerky brand that's grown with the help of a Sasquatch spokescharacter, is hungry for a new marketing approach. It's working with agency search consulting firm Pile on a review that includes creative, digital and social. While Jack Link's said current agency of record Carmichael Lynch would be invited to participate in the process, the agency quickly said it declined to do so. "We're proud of our 13-year partnership with Jack Link's and the brand we've built together, resulting in a household name and the No. 1 snack in convenience stores nationwide," Carmichael Lynch says in a statement. "We've declined to participate in the formal review process and continue to focus on the work at-hand and launching our newest campaign together." Jack Link's says Periscope, which was named as its digital agency of record in 2016, is no longer on that account. The review was previously reported by Adweek.

Zimmerman's 'lovin' it
Omnicom Group's Zimmerman has been busy hiring for its McDonald's co-op account. In case you forgot, Zimmerman is one of the agencies the Golden Arches picked last year to handle local advertising. That co-op review trimmed the number of shops working with its co-ops to seven from about 60. Omnicom's We Are Unlimited, meanwhile, previously won McDonald's national creative account. Zimmerman says it won 18 co-ops, more than any other agency, and has hired more than 30 people to work on the McDonald's business. They include Carol Koepke, senior VP and account director, and Mark Carlson, creative director. Others include Cindy Peterman, Linda Burgess, Simone Marsalis, Stephen Barry, Krystal Sheeran, Jason Richoux. All eight of those newcomers have either worked for or with McDonald's in prior positions. Working on McDonald's has been a dream of agency founder Jordan Zimmerman's since he started his career and he's "lovin' it," Zimmerman says in a statement.

New voice
The Association of Hispanic Advertising Agencies: The Voice of Hispanic Marketing has rebranded itself under the new name Culture Marketing Council: The Voice of Hispanic Marketing (CMC). The organization was founded 22 years ago and Isaac Mizrahi, chair of the newly named group, said in a statement that the change is a "natural evolution" as it continues "to elevate the quality and effectiveness of U.S. marketing by harnessing the power of cultural expertise and impact to drive business results." The group is looking to highlight what it calls the "new American mainstream" which is powered by multicultural ethnicities.

Analyze this
Spark Foundry USA has tapped Lisa Giacosa, Kimberly-Clark's former global head of media, as its new head of analytics and insights. It's a return to Publicis Groupe for Giacosa, who previously held roles at Starcom Mediavest Group and VivaKi. She will report to chief client and operations officer Sarah Kramer, who says Giacosa will give Spark an "indomitable advantage" in giving business results to the agency's clients due to her background and ability to look at challenges from both a client and audience perspective.

In serious and somber news…
Ranjan Kapur, chairman of WPP India and a longtime top Ogilvy & Mather exec who built the agency into a powerful force in India's ad world, died of cardiac arrest Saturday, the agency said. He was 75. Kapur wasn't officially a creative, but he had a creative streak, and he loved sketching. Once, when a major client was upset with Ogilvy's creative team, Kapur took the fall by drawing a sketch of his own head on a platter and sending it to his higher-ups, said Piyush Pandey, the highly respected executive chairman and creative director for Ogilvy South Asia. "That was the kind of person he was," says Pandey, who considered Kapur his mentor. "Very selfless. He believed in me and others around him and was ready to back us up."

Hanging with @adage cameraman Albert and @Lindsay_Stein at #Admeter pic.twitter.com/B00CkXxF7B

Number of the week
30-plus – the number of Super Bowl commercials that Brian Braiker, Ad Age's intrepid editor, has watched and reviewed. Be ready for his thoughts on Monday.