Mindshare, Rockfish, Others Make Room for Businesses to Work Side by Side
READ THIS NEXT
Publicis says it has parted ways with Tom Goodwin after his COVID-19 comments on Twitter

BATAVIA, OHIO (AdAge.com) -- Three-martini lunches, golf outings and the like are time-honored traditions dating well before the Mad Men era, but a new form of agency-client relationship building is now taking shape in many quarters: sharing office space. 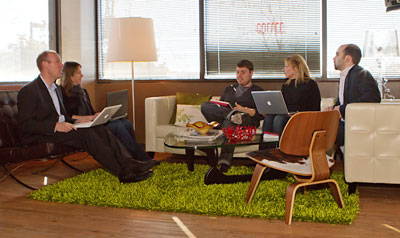 Unilever's new "agile working" policy, which lets employees work from home -- from agencies or from just about anywhere provided they get the job done -- has enabled that. But so has a growing realization by agencies that even in (and largely because of) the era of digital communication, it's often easier to work alongside clients.

When Rockfish Interactive opened a Cincinnati office late last year, it purposely set aside space for clients or prospective clients whose offices are well within view, including Procter & Gamble Co., Kroger Co. and Macy's. The space is also open to visitors from media companies such as Google and Facebook when they're in Cincinnati visiting.

The idea started with Rockfish's home office in Roger's, Ark., where an outpost of a coffee company the agency launched in 2006 -- Silver Joe's Cafe -- is open to clients, said Dave Knox, chief marketing officer.

"With a lot of corporate offices moving away from the city core," Mr. Knox said, "when we can provide that kind of physical space I think it's a useful satellite office" for clients.

Rockfish's office also directly overlooks the construction site of a new Cincinnati casino -- a likely future customer of a new client, U.S. Playing Card, based nearby in Erlanger, Ky. Doug Kruep, VP-general manager of the unit of card marketer Jarden Corp., said he'll probably take Rockfish up on its hospitality. Having the space available, he said, is part of what makes Rockfish "feel more like a partner, like a team, than it is an agency."

Partners & Napier, Rochester, N.Y., has made space available to clients, including Kodak and Bausch & Lomb, at least since 2004, said CEO Sharon Napier. "We built out a big area where our clients can have their global teams meet," she said. It also came in handy last summer when the agency had 52 days to create six 15-second spots for Kodak.

"We had this huge war room and everyone came in every day, client and agency team," she said. "We feel like we do our best work when we roll up our sleeves and work with our clients."

In a nod to Mad Men days, Partners & Napier also has an open bar for its own employees and clients every Friday from 5 p.m. to 7 p.m. "It's part of working together, playing together," she said. "Sometimes you'll have a crazy week with a client and we'll say, 'Come on, have a beer with us.'"

Beer isn't part of Unilever's agile-working policy, but working alongside agencies is, said Ms. O' Brien. Many of Unilever's employees live in Manhattan or elsewhere east of the George Washington Bridge, in part a legacy from when Unilever also had an office for personal-care marketers in Greenwich, Conn., easily accessible by train. Letting marketers work from home or from Manhattan agency offices can at times save hours of productivity that would be spent in traffic in addition to building relationships.

The last time Ms. O' Brien was at Mindshare, she didn't have a set meeting at all, but it was a station away between other meetings in Manhattan. She ended up running into one Mindshare executive who let her know about competitive websites she should check out, another who was working on a new project for Unilever and a third who was new to the agency's Unilever team, "who I probably wouldn't have met for months," she said. "In a short period of time I left with a lot more things to think about and a good feeling about the work being done at Mindshare."

The agency has two large conference rooms and an office reserved for the Unilever employees and the agency team, said Michael Epstein, managing director and lead executive on the account at Mindshare.

"It's pretty rare not to have either some combination of the Unilever media team or brand team in the office on any given day," he said. As Unilever's agile-working policy takes hold, Mindshare is probably going to expand the space available even further, he said, "because we find ourselves running out of space."

In similar fashion, Mindshare is increasingly opening space in Chicago for another client, Kimberly-Clark Corp., including one client-integrated marketing planning executive based at the agency office, said Dan Reaume, managing director in Chicago.

Most K-C marketers are in Neenah, Wis., not exactly a short commute, but close enough that they travel to Chicago often. "Agencies always offered" space to clients, Mr. Reaume said. "Now clients are taking us up on it more for the convenience of it."