Now onto this week's Agency Brief.

Ugly food duckling
Content shop Wayfarer Entertainment and The Ad Council have teamed up to create a series of videos aimed at showcasing the food waste problem in America. Each year, 40 percent of food in the country ends up in the garbage and food is the No. 1 item in U.S. landfills. The video series, which is part of The Ad Council's "Save the Food" campaign, features "Jane the Virgin" actor Brett Dier and Michelin Star chef Josiah Citrin perusing Los Angeles farmers' markets for damaged, unwanted food. Citrin, owner of Mélisse, stuns people in the videos by whipping up beautiful, gourmet dishes using the ugly produce that was thought to be expired.

Born to run
Brooklyn-based creative agency Madwell has created a campaign for the upcoming TCS New York City Marathon called "It Will Move You," focused on capturing the many emotions participants, spectators, volunteers and more feel during the 26-mile race. The initiative includes a 30-second TV spot, which will be featured on ABC, to help build buzz about the Nov. 5 event. The spot includes phrases like "It will inspire you" and "It will push you." Special storytelling videos are also being posted on social media channels leading up to the race. 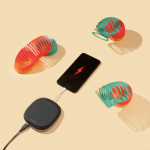 Screenshot from SanDisk iXpand Base campaign

Slinkies to make storage sexy
R/GA and creative social studio Kvell are launching an influencer campaign for the SanDisk iXpand Base, which includes unique content from four artists: John Spannos, Ilka Franz, Cristian Malagon Garcia and Forrest Aguar. Each artist-designed video and gifs showcase how the new memory storage device backs up your data and charges your iPhone at the same time. The branded content, which includes toys, donuts and chattering teeth, is being featured on the artists' Instagram accounts, as well as on SanDisk and Kvell's channels.

Activation nation
If all the activation talk during New York Advertising Week was any indication, experiential is having a moment, and WPP's Berlin Cameron is the latest agency to jump aboard. The creative agency is launching a new in-house experiential arm called BCXP to create "one of a kind, interactive and tangible experiences"—think touring events, product launches and pop-up shows—for companies like Capital One, ABC and Cohn & Wolfe. The new division will be led by Managing Director Robin Potash, Creative Director Joel Arnold and Head of New Business Lori Brabant.

Huge gets supersized
McDonald's named Huge its global experience design innovation agency, the Brooklyn-based shop said this week. Huge will work on designing "a digitally enabled customer experience model that sets new standards for convenience and performance across stores, mobile devices, and the web," it said in a statement. McDonald's, like other restaurant chains, is trying to strengthen its tech connections with customers, including updates of its apps and the rollout of mobile order and pay in the U.S. Huge is opening a Chicago office to handle the work. At first, its Chicago home will be in the John Hancock Center, the same building where IPG sibling FCB Chicago is based. McDonald's is bringing its headquarters back to Chicago next year in a new building after decades in suburban Oak Brook.

Phone's ringin', dude
FCB Kuala Lumpur has won the creative business for Motorola Asia-Pacific, following a competitive pitch. The agency's Singapore office partnered with its teams in Ho Chi Minh, Jakarta, Bangkok and Manila, as well as MullenLowe in Singapore, to win the account. The shops will ring in (phone joke) excitement based on an activation plan around audience insights, while also working on promotion marketing for the region.

Have a Boo-tiful Friday the 13th, everybody! pic.twitter.com/29nT7w1zvO

Number of the week
18 – the number of days until Halloween, so get ready to dress to impress. Send me your agency costume photos after the 31st and your photo may appear in that week's Agency Brief.