READ THIS NEXT
Audiences are leading the lean-back media revolution. Where are the advertisers?
Credit: istock

Most marketers don't fully comprehend what they're paying for when they hire an advertising agency. They're not fully aware of the literal nuts and bolts of the service and deliverables being paid for, who provides them and how. More than anything, they don't know how many people it takes to run their account. This is true of virtually all marketers I have ever dealt with—big national advertisers with multimillion dollar budgets as well as smaller, independent companies with only one or two minor brands and budgets to match.

How many people does it take to run an account? In almost all cases it's exactly the same: six.

Add to that a talented strategist, account director and producer and you have what you need. Six people. That's it.

Obviously, agencies can choose to staff their accounts differently. Layers of account team members can be added for things as frivolous as appearances and as necessary as matching the size of its clients own marketing team. Money can be spent on different testing and research tools, all of which is for the client's comfort and rarely affects how the work is approached or the end product itself. Just know that no matter how it's served up to you, the actual service you're paying for, the discipline of creative advertising, never really changes.

Now, of course, in any small or mid-sized company there can be a place for the support of some junior staff, as well as a few positions that support the entire agency's operations and output. And on some very large accounts additions like a second creative team could add to the works quality and turn-around time. But, it's highly likely that the service you require does not take as many people and as much time as most clients believe.

And, as most "big" accounts are at big agencies, there are more drawbacks to consider. While a smaller agency is naturally more team-oriented, large agencies, by their nature, tend to be environments where individual employees often tend to care more about themselves and their own careers. Creatives at big shops often work quickly to finish one assignment to spend their time on another one they think has more creative potential. I know big agency account managers who have ended up actually writing TV scripts after they couldn't manage to convince a creative to work on their assignment. Large agencies are also good places for less motivated people to hide, and spend their time avoiding rather than accomplishing.

It's inevitable as advertising evolves that, with a few outliers, most great creative shops will consist of about 50 people, not hundreds. Marketers will still pay a premium for great creative work, but not nearly the rates that some are paying now. Agencies won't grow vertically, they'll grow horizontally. Audiences are growing smaller and more segmented, but there will still be a demand for effective, breakthrough creative advertising. It will just be smaller groups of people with a higher concentration of talent providing a better service and product.

While it may feel natural to equate the fame of your brand or the size of your media buy with the actual size of the agencies you're considering working with, the truth is that doesn't mean a thing. 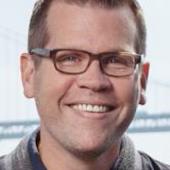 Eric Kallman is co-founder and creative director of Erich & Kallman