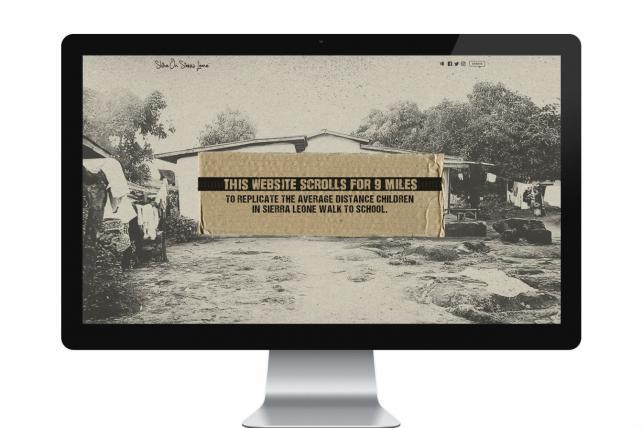 Happy Friday! This might be your last week in the office until 2018 so, if it is, have a wonderful, relaxing holiday break (unless you have to finish your A-List submission—then get to work!).

Shine on
David & Goliath has partnered with nonprofit Shine on Sierra Leone to create a pro bono campaign titled "9 Mile Scroll" aimed at highlighting how children in Sierra Leone walk a dangerous nine miles to go to school. Kids in this West African country must deal with 100-degree heat, dirt paths covered with deadly snakes, abandoned diamond mines filled with malaria-infested waters and roads lined with sexual predators and traffickers. The enlightening campaign includes a website, out-of-home posters, billboards, and an Instagram initiative featuring influencers such as Zoe Kravitz and Rosario Dawson. It takes children in Sierra Leone three to five hours to walk to school, so users on the website can scroll for three to five hours to get a small piece of these kids' experiences. The goal of the initiative is to raise money to build more schools in the country.

It's all Greek to me
In 2016, Anomaly invested in and helped launch Hmbldt, a cannabis company that uses science to deliver specific doses and targeted health benefits for consumers. The product was named by Time as one of the 25 best inventions that year. Now, the brand has been renamed "Dosist," which comes from "dosis," the Greek work for dose, or "an exact portion prescribed, literally a giving or gift." The new name helps reinforce the company's commitment that its dosage system help people feel better naturally, from helping to reduce pain to increasing focus. And have no fear, Hmbldt fans—the rebrand won't affect the look, feel nor the contents of the dose pens.

We all scream for ice cream
New York accelerator agency Bullish, known for investing in young, promising brands, such as Peloton, Matchabar and Care/of, has a new brand in its portfolio: Ample Hills Creamery. The Brooklyn-based ice cream company focuses on making its sweet treats the old-fashioned way, which means slowly and by hand. Signature flavors include Salted Crack Caramel, Ooey Gooey Butter Cake and The Munchies. Bullish also recently brought on four new staffers, including: JJ Kraft and German Rivera Hudders, previsouly at Droga5 have been hired as creatives; Julia Kim, also previously at Droga5, si a designer; and Laura Hockstad, most recently at Arnold Worldwide, an associate in brand management and operations.

Going dark to give light
As part of its annual holiday greeting card, DigitasLBi is shutting off all the lights across its six U.S. offices for the last week of the year to save energy and money. The agency plans to donate the money saved to Light Up Puerto Rico, an organization working to restore power in Puerto Rico, where 40 percent of the population is still without power due to Hurricane Maria. The agency is also dark on all social channels and on its website.

Power in purpose
Oberland, an agency that focuses on working with nonprofits and purpose-driven brands, is finishing off the year with a bang by adding six new clients to its roster. The new businesses include: the No Kid Hungry campaign; The National Alliance on Mental Illness (NAMI); Hadassah, The Women's Zionist Organization of America; PropelNext (an initiative of The Edna McConnell Clark Foundation); The Leukemia & Lymphoma Society (LLS); and a.i.r. nyc. Oberland, which also counts The Nature Conservancy, Blue Man Group,and New York Institute of Technology among its clients, now has 20 clients and 20 staffers after starting with two employees in 2014.

Why understand #TaxReform when you can have Wreath Reform. Thank you, @TwoBirdsArtistry for teaching us how to make festive decorations for the holidays. pic.twitter.com/p1OBGCTCZt

Number of the week
14 – the number of days, including Friday, that all you agencies out there have left to submit for Ad Age's Agency A-List Awards. Grab a cup of hot cocoa (or hot mulled wine) and get cracking on those submissions!